(*) I love regional accents.  One of the most fascinating is that of people from Long Island, NY.  Sometimes these folks will pronounce an "a" as an "er" when it comes at the end of a noun.  For example, "Aruba" becomes "Aruber" and "Florida" becomes "Florider".  Don't get me started about how people from the Philadelphia area pronounce "water" as a word that rhymes with "udder".

The next few days are what I consider my first real vacation since 2019, and my first time flying since August 2018.  Actually, and maybe to make up for a lost time, this is my first of two vacations this year, with the second being a week in Maine during July.  For this extended weekend, the place to go is St. Augustine, Florida, where a good friend of Ms. Rivers spends the winter months.  I've never been to this part of Florida, and I've always wanted to see the old Spanish architecture of St. Augustine, so I was all in for this trip from the very beginning.  I will note that this same trip had been rescheduled I think more than once due to various, sundry issues.  In any event, we're here. 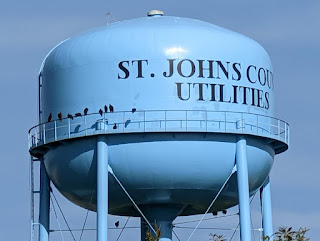 (vultures...hopefully not an omen)
I'll confess right off the bat that Florida isn't necessarily my favorite place to be.  I've been here about a half-dozen or more times, going back decades.  For me, it's one of those places where the promise is always 1000% better sounding than the delivery.  That's not a reflection of the people here, who are almost always exceedingly friendly, but rather more about other things, including the weather.  Yes, for example, it's nice to not have to deal with 20 degree days in the winter, but then the trade-off is jungle-esque conditions in the summer when you don't want to go outside anyway.  As they say, life is about trade-offs.
I also have this image that every other person down here is carrying a gun.  Not my thing.  If it's yours, well, that's good, and I hope it works for you.  As for me, well, seeing someone other than a police officer packing heat in a Cracker Barrell restaurant seems just oddly immature, and it makes me feel far less safe.  Just what is that person trying to prove by side-holstering a 9mm pistol while eating pancakes?  Is that some kind of warning to the kitchen staff, along the lines of "these pancakes better be good, or Mr. Glock might get upset..."?
Here's one other oddity about Florida:  I was reminded this morning that sometimes the water stinks.  As in smells.  As in it smells like what I expect of a salt marsh during a breeze-free 90-degree day in July.  It smells so bad that I feel like I need a shower after my shower.  Thank God for deodorant.
Not to be outdone, the actual trip down here was mostly uneventful, but I did learn something important:  I breathe differently when I am falling asleep.  I discovered this while almost dozing off on the flights yesterday (we got up a 4am to catch a 6:15 am flight out of Scranton) with a mask on my face.  I literally could not breathe, so much so that I ended up having to go to the restroom on the flights not to meet a biological imperative, but rather just to have a few minutes to catch a deep breath.  I'd be more bothered by the whole thing if it weren't for the fact that having everyone wear a mask while flying in a contained tube tightly packed with other humans actually does seem like the right thing to do during (hopefully) the waning days of a pandemic.
Anyway, I am here and it's about time to start the day.  I'll do my best to stay out of trouble.
Created By Stephen Albert at 7:55 AM