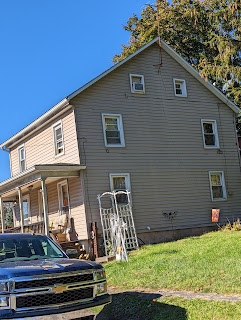 During a trip, last November to Maryland and West Virginia, Ms. Rivers and I made a detour on the road home.  That detour was to a town in Perry County (Pennsylvania) where I lived in the late '80s.  This is also where my oldest daughter was born and was the first time I had been in that corner of the universe since December 1988, although I may have driven by once in the 90's on the way home from a business trip.  Regardless, it was definitely the first time I actually spent the time to notice things.

What did I notice?  Well, the very small town has grown a bit, and the former home we (my first wife and I) rented has changed a bit.  See the photo, above.

Back in those days, we rented the house from a very nice older woman named Mrs. Shull.  The decision to rent to us came down to one factor:  Her husband (Clarance) seemed to think that I reminded him of his younger self.

"The waiter poured our memories in a tiny cup
We stumbled over words we longed to hear
We talked about the dreams we'd lost, or given up
When the whistle caught the night
And shook silence from my life
As the last train rolled toward the moon"

Looking back, things were a bit stressful (low paying job, constant car troubles, being a new father, etc.) but in retrospect, I think I actually enjoyed living in Perry County those 3 + decades ago.  I realize there is some element of nostalgia that time brings on to most situations, but there was also something kind of magical about having to figure out the world one's self.  There were daily struggles, but there were also seemingly endless possibilities.  The challenge then...and the benefit of hindsight...is that I can only clearly see that now.

Speaking of now, it's been said in songs, poems, and popular culture that you ultimately can't go back, defining "back" any way you choose.  What I love about the song Desert Moon is that it makes that very point, but in a way that makes me (at least) feel better about it all.  Not that I wouldn't want to necessarily go back, but it would be nice to experience those times once more, if even just for a fleeting moment.  Not because they were "better" but just because I was so very different.

These days I would say that I am smarter.  Maybe make that more "seasoned".  I also have more than 35 years of memories between then and now.  Some of those memories are priceless, including the birth of two more daughters, and watching all three become independent professional women; some of them are pretty damn terrible, including witnessing death and heartaches.  Maybe it's a testimony to perseverance...or maybe just being incredibly stubborn...that somehow the good and the bad seem to balance each other out most days, although I will readily confess that there have been times when that balance has been pretty precarious.

In the end, I suspect that there is a reason why, outside of the world of science fiction, we can't really ever go back.  Maybe we're just not capable of processing such a thing if it were possible.  Then again, maybe we can...in our memories...and possibly in some way after our mortal coil has been fully spent in this life.  In any event, we all get to find that out eventually.

Created By Stephen Albert at 9:51 PM