I was born in 1964, which means that, for the first part of my life, I lived under the specter of the Cold War and the lingering fears of nuclear war.  That seems so very long ago, as if the world has evolved well past that kind of thing, but yet events last week in Ukraine have brought back scores of not-so-pleasant memories.  I confess to having some serious anxious thoughts as all of these current events unfolded, which is difficult to write (I'm supposed to be always in control, in case you didn't know that...) but never the less very true.  As I write this, I'm still feeling somewhat anxious, and it seems like events could further escalate out of control at any moment. 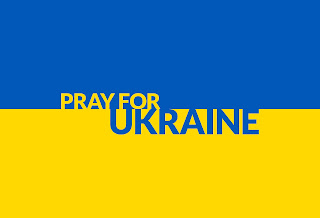 I have no reassuring commentary or answers for any of this; at best, what I can do is to remind myself that I need to live in the present moment and acknowledge the futility of worrying over the actions of a madman who is half a world away.
Not to "silver-lining" this in any way, but there is something quasi-wonderful about what is happening around the world as these events unfold.  Whether it's the Swedish soccer team refusing to play the Russian team, or Poland closing their airspace to Russian air traffic, there are demonstrations throughout the world that testify to the fact that the collective us isn't going to just let the aggressive actions by the Russian leader be swept under the rug.  The brutal actions of one country will not just be treated as merely a tragic event, along the lines of the world's response to the Soviet repression of the Prague Spring (reference HERE) in 1968.  It seems that the world has grown since then, and not just in population.
Will these large actions (such as banishing key Russian banks from SWIFT) help to convince the Russian leader to abandon the course of invasion or will they simply further embolden him, like a pizza rat protecting a crust in a New York City subway?  None of us know, but we can hope for the best.  We can also pray if we are so disposed.
Regardless of what happens, one thing is for sure:  The world is forever changing as a result of these events.
I want to believe that the change will be for the best, banishing the last vestiges of conquering by force into the history books.  Part of this good is the undisputed fact that it was impossible for the Russian leader to somehow hide his intent in a world where there is video everywhere, real-time satellite imagery, and the ability that exists for any of us to disseminate information globally via social media.  For all of its flaws, this very well may be one of the truly good things that social media has brought us, namely a world where it's simply harder to pull off false-flag actions as if this were the 1939 Germany/Polish border all over again.
The alternative...namely a change for the worse...is a grim prospect.  To quote the late Levon Helm, that would be "an adult-sized portion".
If you are reading this and stressed/anxious about these events, well, my wish is that you find a kind of separate peace when it comes to what is happening in the world.  Hopefully, the world will find a way back (to a better) home.
Created By Stephen Albert at 9:34 PM