Yesterday's time in the town of St. Augustine did not disappoint, and for anyone with even a passing interest in architecture, this is quite a place.  I didn't bring my DSLR camera for this trip, mostly because I didn't want to end up dealing with it at the airport, but I was able to grab a few great photos using the Pixel 6 Pro.  Here's an example... 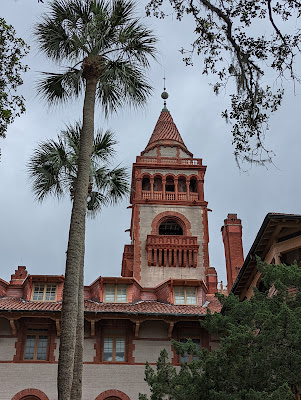 (Flagler College, St. Augustine)
The limits of transferring cellphone pictures to my laptop mean that it's just too impractical to share a ton of photos now, but I will include this...the most ornate Presbyterian church in the known galaxy, one that would give any Roman Catholic cathedral a run for its money: 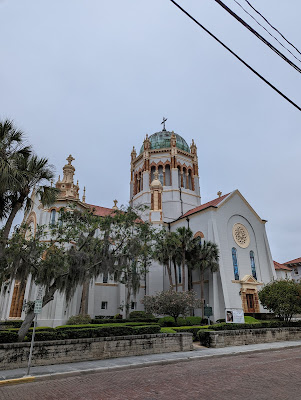 Yesterday's walk-about included some time at the Castillo de San Marcos National Monument, which is genuinely a treasure and a must-see for anyone visiting the part of Florida.
Yesterday ended with dinner at a small chain restaurant called "Willie Jewells Old School Bar-B-Q".  I'd have to go back to visits to Texas in the 1990s to remember brisket that was as good as what I had at this place.  As a kind of post-script, the brisket I had was actually too good...as in I ended up visiting GERDland twice last night.  Not fun, but then again we are probably going back tomorrow.  I am nothing if not a glutton for punishment.
Today's events included an earlier morning trip to the beach at Anastasia Island, which was wonderful.  There weren't a ton of people on the beach, but I don't think swimming was either allowed or advisable due to surf conditions. 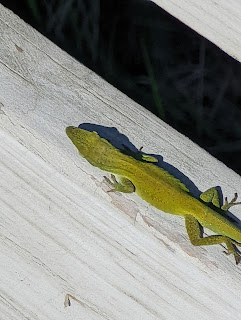 (hanging with the locals at the beach)
After the beach, there was some time with an old friend of Ms. Rivers and her husband, followed by a last-minute visit to a place called Buc-ee's, which can best be described as the Jerry Springer of mega-gas stations.  Mega as in you could probably fit 3 or 4 Sheetz inside of it, with room to spare for additional beaver-themed merchandise. 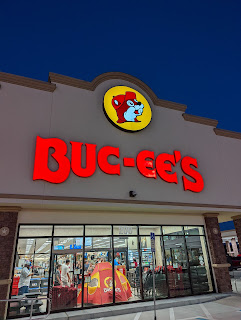 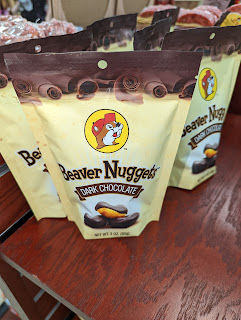 Yes, the company logo is a cartoon beaver wearing a baseball cap.  And yes, I got a teeshirt of said cartoon beaver wearing a baseball cap.  Think of this place as being somewhere you probably want to visit at least once, if for no other reason than the sheer experience of it all.
And that was the day.  Tomorrow is our last full day in Florider, so there will be more hiking, more brisket and likely another GERD attack tomorrow night.  It's all for a good cause though.
Created By Stephen Albert at 9:35 PM