"...and he said Nothing as he entered the courthouse" 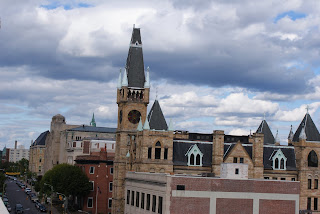 Now former Scranton Mayor Bill Courtright said nothing to reporters as he entered a federal courthouse in Williamsport to plead guilty to three felonies, all involving money and corruption.  You can read the actual indictment HERE.  You can see a video of (a silent) Mr. Courtight entering the courthouse HERE.

Folks can make their own judgments about the felonies committed by the former mayor.  In terms of actions, what I will say is this:  Bill Courtright owes the residents of Scranton a public explanation.  It's simply not acceptable to merely fade off into a perp walk sunset.  Scranton residents invested in his administration.  He had some good people working for his administration, and they are owed an explanation as well.

This whole sad episode is particularly stinging because it's NOT 1960.  Growing up in Scranton in years past, you expected this kind of thing.  It was "how things are done".  There was, for far too long, a conspiracy of silence when it came to politicians and certain groups in the Scranton area.  The newspapers were complicit, the Church was complicit, unions were complicit, and far too many residents were complicit as well.  It was a system designed to help the well off and occasionally throw some crumbs down off the table to a few, just to keep their hopes up.  It was a system that we had hoped was just about dead.  Given Bill Courtright's brazen felonies, the system isn't quite so dead after all.

In the end, maybe one of the worst crimes committed by Bill Courtright is the one he was not indicted under, namely making so many believe that municipal corruption was a thing of the past.

Created By Stephen Albert at 11:39 AM