...and the rock cried out no hiding place

See THIS LINK for a reference to the title.

Fun fact:  This is the second time in about 11 years that I've used this blog post title.  The first time was on November 22, 2010.  That was a pretty trying time for me actually.  I'm not making any comparisons from then to now, but it has been something of a bumpy ride for me over the past year, pretty much coming to a head at the end of June.

Details on the above aren't needed (and, if provided, might actually get me in trouble anyway), but what I will share is this:  My personal life has been nothing short of great.  My health is okay (I need to lose some weight...).  My children seem to be doing well.  My professional life though has been a struggle.  For me, that has been a big deal.  A very big deal.

Understand that what I do for a living, and where I do it, has had an over-sized impact on my life.  Growing up I was just a poor, ungainly tall, awkwardly thin kid from a housing project and I just knew that I had to do better.  I didn't know what "better" was, other than the fact that one day I wanted to have a house where I could plant Marigolds, just like my well-off cousins had at their houses.  It was as simple as that, believe it or not.

I have been fortunate most of my working life, by the way.  I worked for a wonderful organization for 28 years...an organization that both makes money and helps people live better lives.  Despite losing my job to a corporate reorganization in December of 2016, I am exceptionally proud to be an official retiree of the Prudential Insurance Company of America.  I even have my signed certificate of retirement framed.  If I do nothing else professionally, I would still be able to look back and say "I did well".

Since then, well, it's been a struggle.  Sometimes, for whatever reason, we just don't fit into an organization well, regardless of talent or desire (or lack of desire).  That struggle culminated in late June (as noted above), with me once again finding myself being corporate re-organized into a free agent.  Long story short, my free agency was to be short-lived, and I started a new job on July 22nd.  It's my honest hope that this will be the last full-time job I have until I "really" retire, which will be in something like 10 years.  All signs point to this being both possible and desireable at my new employer.

There are people to thank in all of this, none the least of which is Ms. Rivers, who has known just how difficult of a ride the past year has been for me, and who literally kept me sane.  I also have a great group of co-workers to thank at my last employer; they helped me in ways that they never realized.  Last but certainly not least, I have the senior leadership team at my new employer to thank for giving me this opportunity to re-anchor myself in productive, meaningful work.

Finally, I will admit that I didn't want to write this posting.  I just don't want that kind of attention.  But I can't both avoid this and just write about other stuff, which explains why I haven't published anything since July 12th.  I need to get these sentiments out of the way now and resume the ruminations over other mundane things, per the usual at www.sgalbert.com.  Why?  Listen to the song:  There's no hiding place down here. 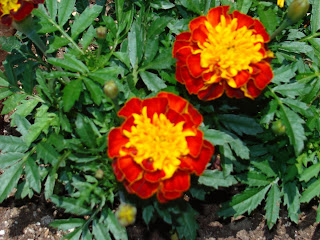 (I actually do plant Marigolds, ever year.)

Email ThisBlogThis!Share to TwitterShare to FacebookShare to Pinterest
Labels: Me (Professional), Me. Deep Thoughts