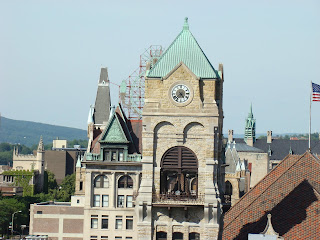 With the guilty plea of Scranton's former Mayor on three felony charges (reference HERE), there continues to be quite a bit written about "rights", as in "city residents have a right to ___________".  As I read all of this stuff, some coming from the horde of anonymous commentators (having the online equivalent of beer muscles), I do think there are some clear lines in the sand.
Lastly, rights, as such, always come with obligations.  For example, with our right to free speech comes an obligation to not use that same free speech to yell "fire!" in a crowded movie theater.  Scranton residents have an obligation in all of this mess, namely to vote.  Based on what I've read over the years, about 1 in 3 eligible voters in the City of Scranton actually cast a ballot in any given election.  In addition to simply being utterly pathetic, voter apathy is the fertilizer that helps fraud grow in government.  For there to be actual, real change in how Scranton is governed, people have to get out and vote.  In the end, you get the government you (do not) vote for, and we all know how that works out, at least in Scranton.
Created By Stephen Albert at 7:28 AM