Fear of Having Peaked

I don't readily admit to being afraid of anything.  In fact, I think I've noted this point in many prior postings.  Yet something has been nagging at me for the past month (or probably longer) that I've only now begun to understand.  That revelation?  I'm afraid that my best days, from a professional perspective, are behind me.

Side note:  I've already established that (physically) my best days are behind me, but that's okay because that's true for all of us who are over, say, age 40.

This fear isn't completely unfounded, as I can point to several things that prove I've been on something of a professional decline of late.  A decline that exists at least in my head, which is probably the point of this whole posting.  Maybe I have peaked, and maybe that's okay.  Well, that's what I want to tell myself.  The more positive alternative is something along the lines of "no, your best days are in front of you".  Kind of like a tree-lined street in Stockholm, Sweden. 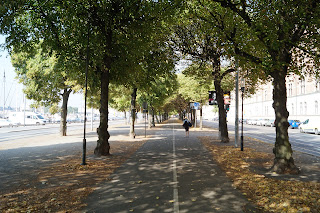 (Just an excuse to share a picture of Stockholm)

I honestly don't know which of the above (past peak/peak is yet to come) is actually true.  I do know what statistics tell us.  That answer is, by the way, 48.  At about age 48 men typically reach their earnings peak(1).  There's even a chart: 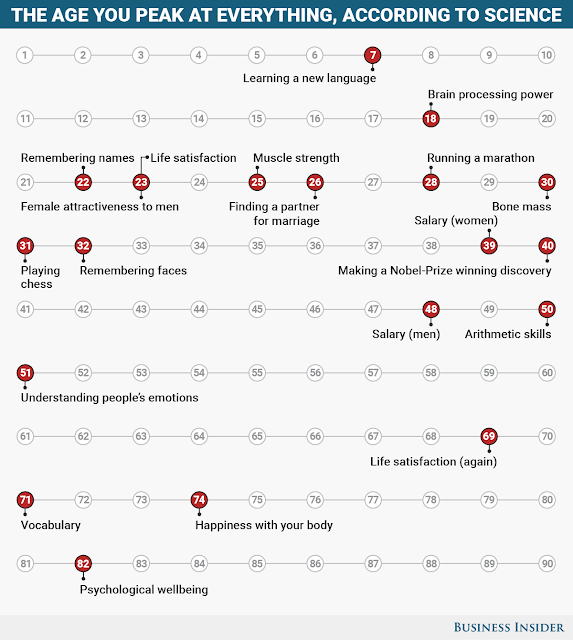 There are, by the way, multiple sources that point to this very same set of conclusions.  As something of a "science guy," I do find some comfort in this finding, the kind of comfort that comes from not feeling entirely singled out.  In case you are curious, that comfort, at least for me, lasted about 12 hours.

I'll note that this really isn't even about money.  In addition to having married well, I've tried to live responsibly, keeping most of my expenses (excluding expensive, once-in-a-lifetime cruises) to a minimum.  No, this is more about pride, about the sense that I have capabilities that may be withering.  It's about circumstances, not economics.

In the terrific book Drive(2), author Daniel Pink makes the case that personal and professional satisfaction hinges on three things:


I actually had the opportunity to hear Daniel Pink speak on this very topic a few years ago at an ATD conference.  Assuming again that this whole mental pickle I find myself in really isn't about money, then is it about missing one of the three things noted above?  That's a question I can't fully answer at this stage.  If anything, maybe this is about purpose (or lack thereof).

Like much of the more introspective stuff I write (and speaking of purpose), the process is as important as anything else.  Just typing this out has a kind of purpose to it.  Hopefully, that purpose isn't seen as seeking pity or anything of that sort.  The interest on my part is simply getting this set of thoughts out of my system.  It's about maybe someone reading this and thinking "yeah, I've felt (or feel) that way too".  It's about trying to organize, make sense of and give another voice to the incessant thoughts in my head around this topic, one that has been occupying too much mental real estate of late.

The intellectual and rational me know that this whole mess is far more in my control than it is out of my control.  It knows that success is more than just what you do to pay the mortgage.  It knows that I could get run over by a bus tomorrow morning and it would still be noted in my eulogy that I came from little and did well for myself.  I'd like to think that part of me...the intellectual and rational part...is ultimately what rules the day.  That's just not how we human work though.  It's simply not that simple.  Maybe the underlying fear here is less about being past my peak and more about a sense of lacking control over this part of my life(3).

Maybe I should have been an electrician.

(2) More on Daniel Pink's framework can be found at:
https://www.mindtools.com/pages/article/autonomy-mastery-purpose.htm

Email ThisBlogThis!Share to TwitterShare to FacebookShare to Pinterest
Labels: Me (Professional)