I've never gone this long...in nearly 10 years of writing this blog...without posting something.  Even now I'm somewhat iffy on this posting, but guilt is starting to creep in, so I best get a typing.

As a side note, I actually wrote a posting last week, but I just don't feel like publishing it.  Doesn't feel right for some reason.

Anyway, a lot is happening.

In news of the sad, one of our cats, Tiger, passed away this past Monday.  Tiger was very special for three reasons:

Tiger passed away by my stepson's side, a point of which is both heartening...leaving this Earth next to someone you love...and saddening (for my stepson).  He will be missed by all, with the possible exception of our two remaining cats, who, in the truest spirit of cats everywhere, seem more or less indifferent to it all. 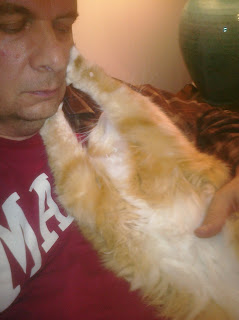 Tiger, doing his "I want to touch your face" thing.

I do miss the fluff-monster, but I take some comfort in knowing that he was likely very sick before he passed, and is now free from all such flesh-laden liabilities.

My youngest stepson has taken a liking recently to Bob Dylan, which, given all of the horrible music out there these days, is nothing short of wonderful.  Like most teenagers though, he has to face a world that's rapidly changing around him.  Some of those changes are incredibly sad, such as losing a pet who was your constant companion.  While none of us can avoid loss, we make the choice to not let it turn us into cynical old people well before our time.  Maybe part of us can stay Forever Young.

Created By Stephen Albert at 9:05 PM