Well, it's October 21st, which means that the month is more than half over.  What has happened so far?  Close to not much.  In fact, while some things are busier that than others, by and large, it's been an uneventful month so far.  For the record, part of me hesitates to even write this, as what happens if October views that statement as being something of a taunt?  I mean there is still part of the month to go, which means all manner of negative things could still happen.  I could, for example, catch leprosy.

In case none of the above makes sense, you can go back and read this posting.

I actually have quite a bit planned for the balance of the month.  Today we traveled to Renninger's Farmer's Market in Kutztown for a few hours of inhaling the smell of smoked swine.  This place is an experience.  Seriously, the smell of smoked meat is almost to the point of over-powering; one time both Ms. Rivers and I had to temporarily leave the building, as it was that strong.  I can thank my oldest daughter for introducing me to Renninger's when she was a student at the very wonderful Kutztown University. 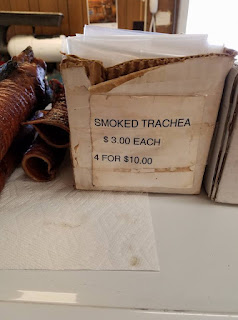 (among the delights that can be found at Renninger's)

This coming weekend, Ms. River's parents are coming up to visit, and there are plans a-foot to hike up the trail (not down...that's for amateurs) at Ricketts Glen State Park.  That's becoming something of a Fall ritual, although I don't know if we've done it enough to actually and officially use the title "ritual" properly.  Even though I'm wildly out of shape, I'm still looking forward to the experience.  My hiking partner is Ms. River's mother, and I'll do my best to keep up with her. 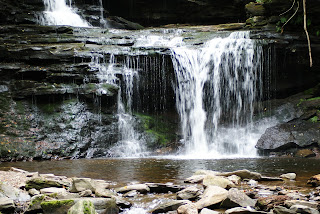 After that?  Heck, October is nearly over.

All of the above is rather ironic in a sense, in that I pride myself on being solidly logical, rational, reasonable, etc.  But yet, almost by habit, I suppose I do have superstitions of sorts.  What is superstition anyway?  Maybe it's a half wish, half blind explanation for the things that we are either too lazy or too preoccupied to mentally grasp.  Maybe it's a kind of mental short-hand for general anxiety, with the subject being a kind of avatar for things that are likely too dark to describe in polite company.  Either way, I still do pick up that stray penny I see on the ground.  And I'll likely continue to have some latent misgivings about October.

Created By Stephen Albert at 4:46 PM