As I start writing this, it's Labor Day, September 4th.  That means that it's less than a month to go until October.  Dreaded October.  What's so "dreaded" about October?  Well, the month has not been friendly to me over the years, a point I've made time and time again.  In fact, some of the most angst-ridden stuff I've written, going back years, was in the month of October.

Just how bad is the month for me?  Well in 2016 I decided I wasn't going to have any more of October's negative mojo, so I embarked on a campaign to "Make October Great Again".  I even had a graphic.  My thought was that I would flood the month full of positive stuff, rendering its powers merciless at my onslaught of all things good.

Then, well, I was "retired" from a company I had which had employed me for nearly 28 years.

Once again, October was not to be denied.

I've thought about bringing the "Make October Great Again" campaign back, but then I got worried that something else not-so-great could happen...for example, I could come down with scurvy...or trench foot...or lose my job again...so it's likely that won't be happening anytime soon.  I'm not one for tempting fate.  Especially when it's called October.

So what's left to do?

Well, I am trying to fill the month with plenty of things to do.  Some are fun, such as a hike up to Ricketts Glen State Park (with my mother-in-law), others will be more strategic, such as studying for my SPHR designation.  I've got less than a month to go, and I've still got a lot of time to fill, so I had better finish my planning.  October looms.

Lastly, and as I've noted countless times before, I actually want to like October.  The weather is ideal, I enjoy Halloween, and I like getting the yard/house ready for the winter.  It just doesn't seem to like me all that much, but maybe there's hope.  Come on October, work with me a bit on this one. 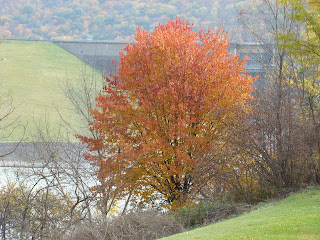 (October at the Kinzua Dam)


Created By Stephen Albert at 7:26 AM

Email ThisBlogThis!Share to TwitterShare to FacebookShare to Pinterest
Labels: Me (Professional), October