Preface To A Broken Wing

The posting you see below (the six *'s) was written by me on September 30th, pretty much unchanged until now, except of course for the fact that you didn't see it then.  In fact, no one saw it, mainly because I didn't publish it until now.  It, along with about 60 or so other postings, sat in my draft bin.  I'm like that when it comes to this writing stuff...

...sometimes I get these ideas and quickly write them out, only to lose interest.
...sometimes I work diligently to finish a posting, only to think "that's too ______"

The September 30th posting, as written below, was the latter.  In this case, the ________ is probably best described as "visceral"; as a result, I didn't want anyone to read it and somehow worry about me.  Why?  I simply don't want that kind of attention.  Odd, given that I put myself "out there" via public Internet postings, but never the less I've never wanted that kind of attention.  I never wanted to be that "weak" person, that "needy" person, that "vulnerable" person, or that kind of person that my mother would have probably mocked in some fashion for their perceived frailty.  Yet, in spite of my need to "win", to be "in control" to be "good enough", there have been times over the past year when I've felt as if none of those things applied.

So why am I publishing this now?

The answer is simply this:  It's honest, and if anything, I've always tried to be honest in this microscopic corner of the Internet.  Yes, you can call me many, many things, but dishonest about how I feel with regard to a particular topic?  Nope.  I'll also note that a friend posted something on social media on Sunday that moved me...it was simple...and I admired this person's honesty.  If they could be honest, well, it feels rather cowardly that I can't.  What's more, I need to break this whole "October Bad Juju" thing once and for all.

Finally, and going back to the idea of "visceral", I think it needs to be okay for me...for everyone really, but especially for me...to not be okay sometimes.  Maybe this, in some small manner, is a kind of statement to note that sometimes those of us who seem the best assembled may, in fact, have a few loose parts from time to time.  It's okay to not win all the time.  It's okay to not be in control every once in a while.  Just facing this is "good enough".

So yes, what you read below was honestly how I was feeling on September 30, 2017.  It's not now how I feel now, by the way, but many of the things that drove me to write "Broken Wing" are still there.  Now I know, that previous sentence sounds all too cryptic, but so be it.  I write this as October is about to end, and by and large, it's been a good month.  That's another reason to write this posting by the way:  "Broken Wing" and this preface are a kind of bookend, if you will, for the month that turned out well.

It's time for something of a confession.  Of sorts.  Heck, I'm starting this and not sure even what "it" will end up being; I just know that I need to write this, so fingers are hitting the keyboard. 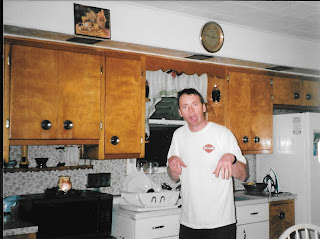 (My late brother Chris, acting like an ass, date unknown)

As I start to write this, tomorrow will be the first day of October, and I am anxious about it.  Pretty odd, huh?  I pride myself on being a rational person, someone who likes to think like a scientist(1),  someone who uses reasoning, not emotion, to view the world.  Yet over this past year or so, some of that logic has failed me.  There have been times when I've felt like a bird with a broken wing.  Am I to be in this perpetual state of damage?

The signs are all around me:

Some days are a struggle to get through.
I have much to be thankful for(2), but yet I don't always feel it.
I'm not sure much brings me joy.
I've allowed piles of crap to sit in my office since January; I'm only now starting to clean up.
I have an exceptionally difficult time relaxing, even when I'm not working.
I have allowed my eating to get dramatically out of control.

I'm illogically afraid that another layoff (a-la "Retirement") or some other major jolt is just around the corner.  Welcome to October.  Will this be the one that finally breaks me?  It's not a paralyzing fear, for that, well, I could probably handle.  Instead, this is more like a small gnawing kind of feeling.  A leprosy of the soul.  It may go hiatus for a day or two, but it almost always returns, rotting away at my innards.

I replay my "retirement" 20-second video notice in my head.  I have a kind of deep sorrow regarding my late brother.  As I've noted here before, in a way I am grateful that I (and not one of my other brothers) was the one who found him; on the other hand, and this won't be a shock, but that was a horrible experience.  I am both sad and angry that he's gone, but yet grateful that he's not suffering.

It feels as if so much has been taken from me over this past year.

For the record, this isn't a "cry for help" and I am in no way, shape or form a danger to myself, others(3), small animals, most insects or any other of God's creations.  Even at my most damaged, well, at worst I try to subconsciously harm myself via eclair and grease overdose.  The latter almost sounds comical, but it happens to be true.

I can envision a happier future:  Being physically healthier, giving myself the benefit of the doubt, not vegetating so much in the evenings.  It all feels though like it's ever so slightly out of reach.

At the start of October, well, it feels like my worst month may have already won.  We shall see.

(1) Which makes me all the more proud that I have a daughter who is becoming a scientist.
(2) A kind and supportive wife, a job that pays my bills, colleagues at work who are a pleasure to work with, physical health (sometimes in spite of my best efforts), and the list goes on.
(3) One exception:  I am a danger to NAZIs and other such types.  Just saying.

Created By Stephen Albert at 11:41 PM