8:12am | Peabody, MA
I'm sitting in the lobby of a Hampton Inn (in some quarters also known as a "Hamster Inn"), located in Peabody, MA.  The free breakfast has been consumed, my Boston brand mint tea is finished, and I'm basically waiting for the rest of my traveling compatriots (Ms. River & my younger stepson) to complete their morning rituals.  The intent is to get on the road today, headed southwest back to Northeastern Pennsylvania.

Peabody, by the way, reminds me somewhat of central New Jersey.  The place sports continuous traffic, with a kind of non-descript, not-quite-industrial, look to it.  For the uninformed, Peabody is north-west of Salem and Boston.  No offense intended to New Jersey.  Or Peabody, which, by the way, is pronounced "pee-bidy", not "pea-body"(1).

This was our second mini-vacation of the year; the other was a trip to Vermont a few months ago.  I'm becoming something of a fan when it comes to the short vacation, mainly because it works well with my attention span (re:  Short).  One of the benefits of living where we do is the fact that there is a lot to see within a reasonable driving range.  I'm sure that's not the case everywhere...sorry residents of Idaho.  This trip entailed two days:  One in Salem and the other Boston.

I've been to both Salem and Boston before, although the former many, many years ago.  Boston?  I was last here about three or so years ago, but this time around we spent a fair amount of time in the Italian section of the city. 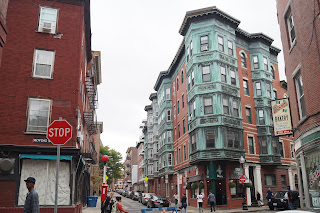 I enjoy walking, so hoofing about Boston was something I well tolerated.  The fact that there was a ton of good food also made it worth the time.  My weight/general health may somewhat disagree with that second sentiment, but hey, I can always work on that aspect of things.

The time in Salem was fun as well.  We took a cruise out onto the bay, which Ms. Rivers always enjoys.  I don't think that I'll have to work too hard to convince her that a retirement closer to the water would be a good idea.  The actual town of Salem is cute, especially this time of the year.  Its kind of like an extended, over-commercialized version of Haloween, except this one is for adults.  I could see where some of the more religiously conservative would be offended by the soft-selling of what they consider to be devil worship, but these days there is plenty of real evil in the world, so perhaps the "buy my trinkets" version isn't so bad after all.  Besides, I do think that there is a larger moral story to be found in Salem. 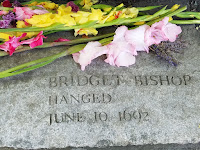 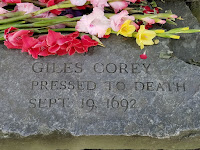 Part of that story, at least in my mind, centers around the need for a hard separation between church and state.  It's easy to take that for granted, but then someone like Roy Moore runs for United States Senate. Alarmist?  Perhaps, but then again hanging witches was considered pretty reasonable in the 1600s.

Another parallel story is playing out in the midst of this micro-vacation.  Over the past two weeks, I did two things that were important to me:  I cleaned out & did some necessary filing in our home office and reconciled my checking account (for the first time since January).  I am somewhat ashamed of both things, but I mention them here for a larger purpose.  Simply put, the past 12 months haven't been the easiest for me.  I don't want or need to get into those details(2) but the fact is that I allowed some things to get out of control.  Stacks of paper and an unreconciled checking account were a kind of avatar of sorts.  I will also note that someone in my extended family pointed out that some of what I've written on the blog over the past few months could be interpreted as being indicative of my not feeling well (my words, not theirs).  That made me angry...at first...and then the fact that they were basically right settled in my head.  Anyway, last weekend I spent an evening filing and cleaning up the office.  This weekend I went through nine months of bank statements and reconciled my checking account (I discovered my balance was low...how's that for a procrastination reward?).  Does this make me feel better?  I'm not sure; then again, I wasn't entirely sure how I felt before feeling "better".  What matters more, I suspect, is the fact that I'm writing this in the first place.  Moving on.

I suspect that any moment my traveling companions will be down here, in the hotel lobby, wanting me to actually interact has a fellow human being.  That's a point Ms. Rivers made the other day (subtext:  It's rude to be playing on the phone while at a meal table...and she's right), so I'm going to close this chapter of the posting now.  With a bit of luck and light traffic, I'll be finishing this up from home this evening.

8:05pm | West Pittston, PA
The ride home was uneventful and traffic was more or less light.  That's somewhat surprising, in a positive way, but I'll take it anyway.  In other news, I can honestly say that I haven't been a complete slug since coming home, as I've managed to clean out two litter boxes and wash laundry.  This is in addition to unpacking from the trip and watching a few Star Trek Discovery short videos on YouTube (I'm still not sure whether I'll actually watch the show).

This week ends on a curious note, as on Friday the 13th of last year I was "retired" by my former employer.  There was a certain symmetry to the timing, I will give you that much.  This will be the only specific mention I'll make of it, as I've already said enough on the topic.  On one hand, I am almost glad that it happened, in the sense that I think it has left me a better person.  Adversity will do that sort of thing.  On the other hand, I still have a feeling of remorse about the whole darn thing.  And a feeling of failure.  I suspect I'll have those feelings for a long time (cue The Beatles:  "Boy, you're gonna carry that weight, carry that weight a long time").  Like most things in life though, it's not as much that it happened but rather what I've chosen to do about it that matters the very most.


(1) I had something of a bet with my wife regarding the pronunciation, which she won and I lost.  She still pronounces a "cubby" as a "cooby".  That must be a Philadelphia thing, you know, like "wudder" instead of "water".

(2) I actually wrote a fairly long blog posting about it, that I decided at the last moment to not publish.  I know, "why is that even relevant?".  It was one of those things that I think I needed to do for me, but then again I had the foresight to get a good night's sleep before hitting the publish button, which turned out to be a good idea.

Like these tiny endnotes?  You can thank the late David Foster Wallace, who used something very similar in Consider the Lobster (which I still haven't finished).

Created By Stephen Albert at 8:52 PM