Time truly is relative, and I'm not talking about couples dating in Arkansas by the way.  No, while time may be constant in terms of measurement, how it's experienced is sometimes highly subjective.  Which brings me back to July 3, 2015.

Having both been married previously (and done the "big church thing"), Ms. Rivers and I, when we decided to get married, didn't want any repeats of history.  In getting married the second time, we both just wanted to do something that was first and foremost simply fun for us and for those in attendance.  Maybe that's one of the biggest changes between first and second weddings:  The first time it's about you and the show, although in all fairness, you mostly don't know any better; the second time it's hopefully more about the things that actually matter (mainly because, by then, you should know better).

We approached the planning process from a project management perspective.  I kid you not:  We actually created a project plan.  That was actually very helpful and further aided in making the whole process far less stressful. 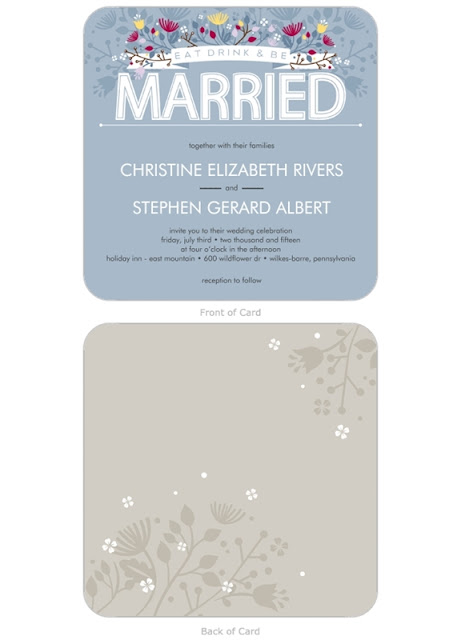 When all was said and done, it was a truly good day, and I'd like to think there have been many more good days since then.

Fast forward to this morning, and before we both went to work, Ms. Rivers presented me with a gift... 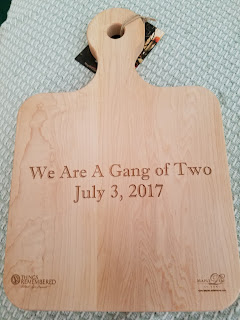 ...on the other side it has our initials.  The phrase, "We are a gang of two", I am told comes from something I wrote on the blog, all be it somewhat paraphrased.  I'd look it up, but why bother?  In a way, talking about project planning a wedding and getting a cutting board as a gift almost perfectly represent just what we've both tried to do in our lives together:  Live simply and love wholeheartedly.

I don't know what my next anniversary (or even tomorrow, for that matter) will hold, but I do know that if it all ended abruptly, I would still consider myself blessed a thousand times over.


I'll end this posting with a song...one specifically that we played at our reception...and one that was immortalized in a framed print given to us by my daughter Rebecca.

Created By Stephen Albert at 11:05 PM

Email ThisBlogThis!Share to TwitterShare to FacebookShare to Pinterest
Labels: C-S