Preface:  I wrote this several years ago, and for whatever reason (perhaps because it "sucked") I never published it.  Here I am though, it's Sunday night, and I have almost no motivation to write about anything.  And, by the way, I enjoy writing, and as such, I promised myself that I'd post no less frequently than weekly.  Sometimes more frequently.  Anyway, for the moment, I seem to be running low on blogging units (a concept copyrighted by local blogger Gort42), and yet I am filled with guilt over the prospect of not blogging at least weekly.  What to do?  Recycle, that's what; see the posting below.

Here's to a new supply of blogging units, arriving soon.

Oh, and here are two random picture of an Osprey sitting on its nest. 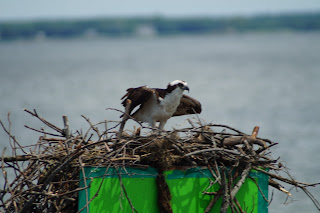 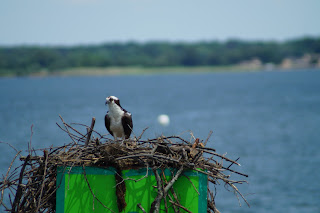 6.  Religion - I don't consider myself religious, although I am a avid reader of religious material; in high school I read every book the Scranton Public Library had on the Church of Jesus Christ of Latter Days Saints, even though I had no desire to become a Mormon.  As a side note, I recently saw the Book of Mormon musical, and it was hilarious.   I do pray from time to time, although I think the act of praying has more to do with getting my head straight than it does actually wanting something from God.

7.  Politics - I don't align with any political party, and quite frankly I think political parties are, well, stupid.  Neither political party has a monopoly on the truth.  I also think that party line voting should be illegal.  I vote for candidates based on their ideas, not political philosophies spoon fed in neat little sound bytes.

8.  Abortion - Gee, should I even include this?  Well here goes nothing.  When it comes to the whole abortion debate, I just wish there was less screaming, yelling and finger pointing and more genuine compassion from and for all sides.  Note the word "genuine", as in what isn't typically seen when politicians talk about abortion.  It bothers me to no end when elected officials use this issue as a wedge simply to court some kind of political base (where the real desired outcome is the accumulation of political power...ponder just how horrible that really is).

9. Guns - I don't like guns, but heck, if you do, well more power to you.  Fire away.  Please just don't point it at me, bring your gun into my house or my place of business.

10. Hunting - I try very hard to not kill things.  This includes insects, spiders and other kinds of critters.  I wish I were disciplined enough to be a vegetarian, but I'm not, so I'll just have to live with that contradiction for the time being.  Now if someone does like to hunt well that's okay with me, but I hope they do it in a way that provides the bare minimum of discomfort for the critter(s) involved and the resulting "kill" is eaten or otherwise used in some meaningful way.  There's a difference between responsible hunting and animal cruelty in my book.

12.  Cats vs Dogs - I love cats, but I readily confess to not being a good enough person to own a dog.

13.  Music - I love music, but I don't have musical bone in my body.  My signing voice is somewhere in range between Michael Jackson and a 12 year old boy who is about to enter into puberty.

14.  Sports - I love to play sports, although I don't have much time for it these days.  Growing up I was constantly either playing tennis, basketball or baseball (in a real sandlot near where we grew up).  Watching sports?  It puts me to sleep.  Too much watching sports on television can, I think, create the need for a lobotomy.

15.  Radio - I am an avid Howard Stern fan.  He is a genius, on par with Hunter Thompson & George Carlin, who created his very own radio genre.  Political talk radio?  I think its a wasteland for those who are searching for someone to think for them.

16.  Tattoos - I will never have one simply because I get bored far too easily to have something that permanent drawn upon my body.  While it's not for me, I've seen a few stories about tattoos being used by breast cancer survivors (link to an article HERE), which I do think is incredibly wonderful. Oh, and let's get one thing straight:  If you get "Ozzy" tattooed on your knuckles, then please don't complain if you have trouble finding a job.  Self-expression is a wonderful thing, but broadcasting stupidity is another.

17.  Drinking - I confess to drinking far too much diet soda and ice tea.  Alcohol?  I may have a drink of it maybe once or twice a year, if that.  Seriously, I really don't like the taste of booze, and I like even less how I feel after drinking booze.

18.  Earliest Memory - My earliest memory is of watching a black and white Superman cartoon in a half double home we lived at on Pine Street in Scranton.  I'm not sure of the age, but I might have been two three.

19.  Biggest Personal Frustration - I have what I'd describe as a frenetic mind, which while it allows me to be interested in lots of different things, has more than a few drawbacks.  I'm sure my incredibly short attention span plays into this as well.  The worst part of it?  That's waking up just about every morning with all these thoughts in my head.  There are times when I'd give all the money in my wallet for just five minutes of true mental calm, especially in the morning.  Sometimes when someone asks me "what you are you thinking" I don't answer honestly, as doing so would both take too long and the answers would be far too disturbing.

20.  Biggest Personal Regret - Sure I have regrets, but even the time spent thinking about them for the blog blurb is a waste.  What's done is done.  Pay attention to the past only to the extent that it can actually help in the present.

21.  Biggest Health Challenge - Bad sleeping habits.  As I've noted here many times, I don't typically sleep well.  See #19.  I think they have medication for this...Thorazine maybe?  I am joking about the Thorazine part.

23.  Famous Person Dinner Game - If I could have dinner with a few famous people, who would be in attendance?  Well for starters, my wife would be invited.  Second, my list would be as follows:  Emily Dickinson, Hunter S. Thompson, Paul McCartney, Howard Stern, Berkeley Breathed, and Albert Einstein.

24.  How I'd Like To Be Remembered - If anything, I'd like to be remembered as a good Dad, a loving partner and a kind human being.

Email ThisBlogThis!Share to TwitterShare to FacebookShare to Pinterest
Labels: Books, Me, Politics, Religion