Since I am in currently in a graduate finance class, I don't feel bad about conducting some basic accounting.  Here we go.

In the last four months...

...I was retired from an employer where I worked for nearly 28 years

I've also read a potentially life-changing book (that I'm starting share with others), and I've had far more time to think than which is probably good for me.

Oh, and I'm finishing up my graduate degree (hopefully by mid-year).  A lot of stuff.  The word "unpack" comes to mind when I think about all of it.  In fact, all I think I need to do is add "heart attack" to the list and I get some kind of prize from the government.  Just kidding, about the heart attack (my heart is in good shape) and the prize.

Now none of this is intended to illicit anything even remotely resembling sympathy (which, as we all know, sits squarely between "sh*t" and "syphilis" in the dictionary*), as I'm busy enough without it, and truth be told, I just don't like the attention.  Pretty odd from a guy writing a blog, huh?  Life is never without its contradictions.

Anyway, I had planned to write about government funding for the arts, which has become something of an issue in northeastern Pennsylvania.  I even have the posting titled, but I just can't seem to start it.  It's as if I need some kind of transition space within my own head, something to take me away from the above list, back into more of a normal way of thinking.  Not that there has ever been anything normal about how I think...about anything.  My head is, at any given moment, not a place that anyone else would ever want to visit, filled with tons on random thoughts swirling around, mostly all at the same time.  I'm just lucky whatever voices I hear are my own.  Scratch that; I sometimes can hear my Mom's voice...but it's always yelling for some odd reason.

Thinking again about the idea of transitions, I think we all have this odd relationship with change.  We hate it when we feel bombarded by it, but yet we'd probably die of boredom without it.  I know that's true for me.  Now granted that I do wish some of the change in my life didn't actually involve other people dying, but hey, I didn't get a vote in the matter.  Whomever does make those decisions is a bit higher up on the celestial organization chart than your's truly.  Along those same lines, I'll share that there hasn't been a lot of action of the career front for me, but more than one person has said to me that this is because there is a plan...a larger reason...if you want to call it that...for me to have been unencumbered over these past few weeks, so that I could attend to other things.  I'll confess that I don't know if I believe that to be true, in part because I just don't see some kind of larger power in the universe actually caring all that much about this kind of detail.  However, I may be falling into the trap of trying to explain, in human terms, something that is infinitely impossible to understand in human terms.

In any event, I've burned through several paragraphs now without saying an awful lot.  This posting has been the Captain Crunch, if you will, of Internet content. 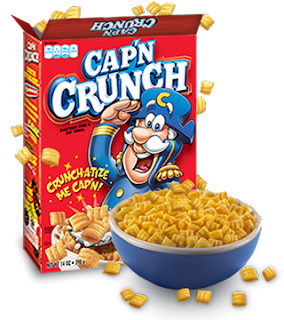 By the way, I love Captain Crunch, even if my wife says that it taste "like cardboard".

Which makes me believe that I need to end things on a somewhat more weighty tone.  So how about this:


5 Things I Have Learned Since October, by Steve Albert

1)  Friends.  Nothing exposes the fallacy of social media "friendship" quite like a personal crisis.  I am deeply thankful for the condolences (both on-line and off-line) offered by so many; I am bewildered by the fact that I didn't hear from others.

2)  Routine.  Even in the midst of seeming chaos, I'm always trying to create a new routine.  We humans seem to be wired for wanting the predictable.

3)  Being Present.  Being fully present in the moment actually does help when things get tense and tough.  Oh, and I'm the last person in the world to advocate anything new-agey or tragically hip.  Study this stuff, as it's worth it.

4)  Job Search.  Looking for a career opportunity in 2017 is a heck of a lot different than it was the last time I checked.  Then again that was 1988.

5)  Your Kids Get Older.  It's great to be proud of your son or daughter when they do well in school (for example).  As they get older and become concerned about your well being and offering you sound advice?  Well, that's pride elevated to a whole new level.  It almost makes getting older worth it.

(*) Dictionary:  A book that defines words, PG (pre-Google). Used in a sentence:  (Steve) Mom, how do you spell cataract?  (My Mom, Yelling) Look it up in the dictionary!

Created By Stephen Albert at 5:22 PM