I stumbled upon this quote the other day, and it's stayed with me, so it's time to share. 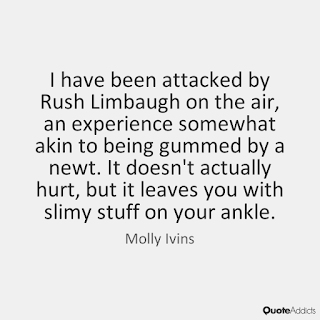 In a related...and more serious...note, I highly recommend THIS column by Michael Smerconish:  Are The Voters Really Mad As Hell?  A thoughtful look at how we got in this horrid political place in 2016.  My favorite quote from the article?


"Business motives drive the titans of talk. They aim to maximize revenue from advertising, which requires the attraction of computer clicks, ears, and eyeballs. That goal, in turn, necessitates producing an authentic, stimulating product. The more passion provoked by hosts, the better their shot of capturing and maintaining an audience.
Bold, assertive, controversial content achieves this goal far better than thorough, nuanced, paragraph-long explanations. This incentive explains why the content on talk radio and cable television news has long been a precursor to the provocative language of the stump speeches of Donald Trump and one of his final GOP challengers, Ted Cruz."
Talk radio...as in Limbaugh, Savage and others on the hard right...has NEVER been about informing, educating, or even thoughtful advocacy; no, it's all about business, as in earning revenue through a constant stream of bitter sound bite mental candy to people so that they will buy stuff from advertisers.  It becomes a kind of bizarre mental arms race into the gutter, feeding conspiracy and fostering an attitude of "it's the fault of _________ you are not getting ahead", where the blank could be filled by everything from ACORN to Obama to Black Lives Matter to fluoride in drinking water, all in the name of increasing advertising revenues.  Who needs a thought provoking discussion when you can simply point fingers and call names?

For the record, having listened to Limbaugh over the years (from time to time) and having read some of his work, I'm reasonably convinced that even he doesn't believe half the stuff he says, but he does know how to generate ad revenue.  Hillbilly heroin abuse may have destroyed his hearing, but it's done nothing to dull his keen business sense.

Created By Stephen Albert at 11:21 PM

Email ThisBlogThis!Share to TwitterShare to FacebookShare to Pinterest
Labels: Journalism, The Donald, WILK