And so it begins with demonizing "them".

It's the trick of despots and dictators alike:  Ginning up a fear and hatred for "them" in order to garner power for themselves.  Put another way, it's creating a need and then offering the sole solution, all in one neat little package.

Look, I get being opposed to "him" or "her"; these people, whoever they are, have names, faces, decisions, records, and actions that can be criticized.  That's fair game, especially in the arena of politics.  Even better is the fact that the accusers can themselves be judged based on the quality of their arguments and how they respond to any push-back they receive from their targets.  It's this kind of give-and-take that I think helps people make better decisions.

All possible value from a give-and-take process falls by the wayside when the target is some nameless, faceless group of people that just don't happen to look or act like us.  Then it becomes simply fear-mongering.  Then it becomes dangerous. 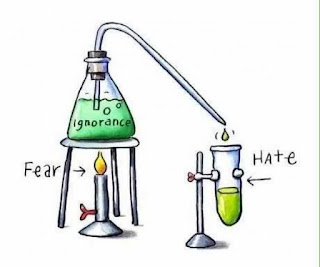 I get it:  Hillary Clinton is a liar.  I don't doubt that actually.  What she isn't doing though is demonizing entire groups and, for example, calling for a religious test for immigrants.  A religious test that, under a possible President Trump, would be applied to Muslims, but in the future could be applied against any other religious group.  What she isn't calling for is the construction of a Berlin Wall on our southern border (a wall which Mexico will never pay for, by the way).  If my choice is the fear-mongering proto-despot or the serial liar, I'll pick the least dangerous of the two, namely the liar.  At worst the United States will not be any better under a President Clinton.  Under a President Trump?  Our very soul as a nation is at stake.

In the end, if you choose to vote for Donald Trump, just do so knowing that your candidate enjoys pointing fingers at, and demonizing the nameless and the faceless, principally because they can't fight back.  Those are the actions of a coward.  He also enjoys scaring you into voting for him.  Don't take the bait.  Don't vote for Trump.  If Hillary Clinton turns your stomach, vote for Gary Johnson.

Email ThisBlogThis!Share to TwitterShare to FacebookShare to Pinterest
Labels: Politics, The Donald