Summer...is flying by.  Maybe that's because I've managed to do a lot.  Getting married.  Some significant house renovation work.  More house renovation work planned.  Oh, and graduate school starting again soon.  Plus my "day job".  I keep telling myself that "one of these summers I am going to take it easy"; yeah, maybe that will be next summer.

Speaking of home projects...we are having a 15.6x14 deck added to the back of our house; basically expanding a small covered porch that already exists.  Having learned my lesson from previous endeavors, this deck is using all composite decking and vinyl railings, which should make it last longer and cut down on maintenance.  We're also having overhead cabinets installed in one of our two full bathrooms and the half bathroom.  In buying the home, our plan from the beginning as been to make changes that would make it more livable for us plus adding to the resale value of the home, as this will not be our "forever" abode.  Come about age 65 for me (and slightly later for Ms Rivers) it will be time for retirement, and I'm working on convincing my wife that retirement somewhere that is about 5 degrees warmer in the winter would be a "good thing".

One other home project in the works...is to have a more modern heating system installed.  Currently the house has electric heat plus a coal/wood stove.  The combination is fine heating wise, but the electric gets mighty pricey (with no sign that electricity rates are going down) and the coal stove...while both quaint and warm...is just a ton of work.  The working solution to actually have two separate heating/cooling units installed...one the for second floor (based in the attic) and one for the first floor (based in the basement).  We're still getting pricing on the work, but I'm thinking the estimate will come in somewhere between "My God" and "Damn, that equivalent to the GNP of Ghana".  On the plus side, I'd rather spend money now in one chunk than slowly get bled to death every month of the winter.  More to come.

Home & Life Philosophy...The above points to a certain philosophy that both Ms Rivers and I share about life (and home ownership), namely to...

Peter Cetera...We attended the Peter Cetera concert at Bethel Woods, NY, on Sunday evening.  The venue itself is wonderful.  The staff is incredibly friendly, the grounds are impeccably clean (one of the cleanest men's rooms I've ever been in) and it's relatively easy to get to from Northeastern Pennsylvania.  Highly recommended. 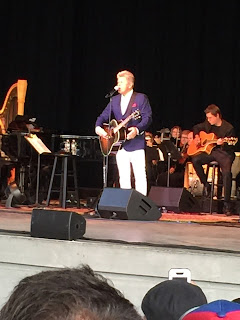 As for the concert itself, well at about age 71 Peter Cetera has a great voice, and throughout a nearly two hour set (backed by a full orchestra) I knew all but about two songs, including a few from his Chicago days.  We should all age so gracefully.

Other Trips (of the not so nice kind)...We recently visited Camelbeach on a Saturday and had what I'd describe as a horrible overall experience.  They overbook on the weekends, that's for sure.  Most of the attractions had 30+ minute waits, which means that for an average stay at the park you're spending something like 80% of your time standing around.  And this is on top of the crappy & dramatically over-priced food.  I can't see going there again on a Saturday.  Ever.

End (of an era)...Last week I did something for the last time, namely pay a college tuition bill for one of my daughters.  This last one was a whopper, but it's been worth it.  How long have I been up to this?  Well my oldest daughter started college in the Fall of 2006, so we're talking about 9 years of the annual ritual of coming up with thousands of dollars.  Again, it's been worth it, but I'm also glad that this era is coming to a close.  It's been a great investment:  One daughter is teaching at a prestigious NYC charter school, one is in a doctorate program at UMass, and the last is finishing her degree in social work.  Proud parent?  You bet!

Bloggery...I did one of my not-frequent-enough blogroll clean-up efforts last week.  It's both a happy and a sad exercise really.  Happy in the sense that I added a new blog (one written by my oldest daughter no less!) and that I noted Gort (the best local political blogger, bar none) is writing again.  Sad in the sense that I really wish some of the other local folks would write more frequently.  There is a ton of writing talent in this neck of the woods.  I did delete a few blogs too; mainly stuff that hadn't been updated in several eons and two blogs where the content was so hidden in advertisements & sloppy design that I just got tired of opening up pages and then having to hunt for the actual text.  Call me crazy, but if you write a blog and have an intriguing posting title, it's more than just a bit annoying when actually finding the content takes more than about 8 seconds.  Yes, that's how much time I devote to such stuff.

"How's Married Life"...is a question I get from time to time at work.  The answer?  For the record:  Wonderful.  It just feels right.

Created By Stephen Albert at 6:33 PM