We're angry, we're pissed off and we're going to continue to take it

My Facebook compatriot Mike Sporer brought a story my attention and suggested that it would make a good blog posting.  Now normally I don't take requests, as this whole blog deal has to really be stuff that I find interesting (which is why I've managed to keep at it since last 2008), but this was just too good an opportunity to pass off.  Anyway, here's the graphic: 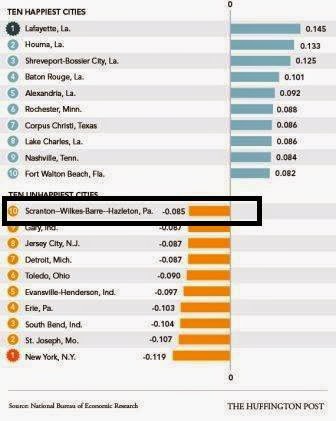 Yes, it appears that our metropolitan area is among the least happy in the United States.  I don't think that Mike was surprised by this, and I certainly wasn't.  If anything, I am surprised that Erie, PA scored worse.

Anyway, the big question is this:  Why?  Why are we so unhappy?  Well I've probably mentioned a while host of things in this blog before, but this is as good an idea as any to maybe do a consolidation of misery, if you will.


Why the residents of Northeaster Pennsylvania are so Unhappy

Perhaps the real reason?  I could go on with some of the more factual stuff, but the point is made.  There is, however, one other point I want to make though:  Mostly, I suspect that we are miserable because we make the choice to be miserable.  More like "choices" actually.  Many of us were raised by miserable parents, so learning about finding the simple joys in life were taught about as often as Mongolian language courses were/are in our high schools. I know that's true for me, and I suspect that's true for others as well.  In fact, much of what I've noted above is a direct result of our choices to be miserable.  For example, we are miserable, which breeds cynicism, which basically opens the door for all manner of political corruption.  It's all a horribly vicious cycle, that, I hope, one day will break.  The good news though is that there is hope:  I can, for example, point to the good work being done by Friends of Lackwanna as being indicative of a change in the business as usual mode of things getting done in NEPA.

And now, ladies and gentlemen, I give you the late Warren Zevon.

Created By Stephen Albert at 6:04 PM

Very nice piece of research, Steve. I believe you nailed it!

Tack this on to your statistics Steve, it was in today's CV: http://citizensvoice.com/news/scranton-w-b-among-most-indulgent-cities-1.1849010

Thanks for reading Mike & Michelle.

I did see the "most indulgent" article today; fitting, huh?