St Patrick's Day is Over

I confess:  I am glad St Patrick's Day is over with.

I get the whole "ethnic pride thing", but that isn't what St Patrick's Day is all about.  Come on, even you know that by now, at least as far as Scranton is concerned.

No, it's about an archaic, to the extreme, "Friendly Sons of St Patrick" organization that, in 2015, still does not admit women.  Now I get it, "friendly SONS...", but still, this is 2015 not 1915.  The fact that politicians fawn all over themselves to speak at this event year after year astounds me.  How many of those same politicians would also speak at, say, a segregated country club?  You would think that the local newspaper would be all over this ridiculousness, but alas, one need only check out the list of officers on the Friendly Sons webpage for an explanation.

The whole thing is borderline bizarre when a reasonable person takes a step back and looks at it objectively.

Moving on, it's also about the Scranton St Patrick's Day Parade.  Yes, an event where local law enforcement has to beg bar owners to NOT open at 7am.  Now I don't know about you, but even when I did drink alcohol...which was a long time ago...the thought of getting hammered before the evening never once entered my mind.  Yet in Scranton, it's almost considered quaint for people to be smashed drunk before the parade even begins.  It's also tradition for the city to paint the street lines green for the parade.  Mind you that the city doesn't have the money to keep the regular lines painted...or fix the craters that have grown out of small potholes...but so I digress.

My favorite visual from the parade? Well that would be this little ditty from the Scranton Sucks Facebook page: 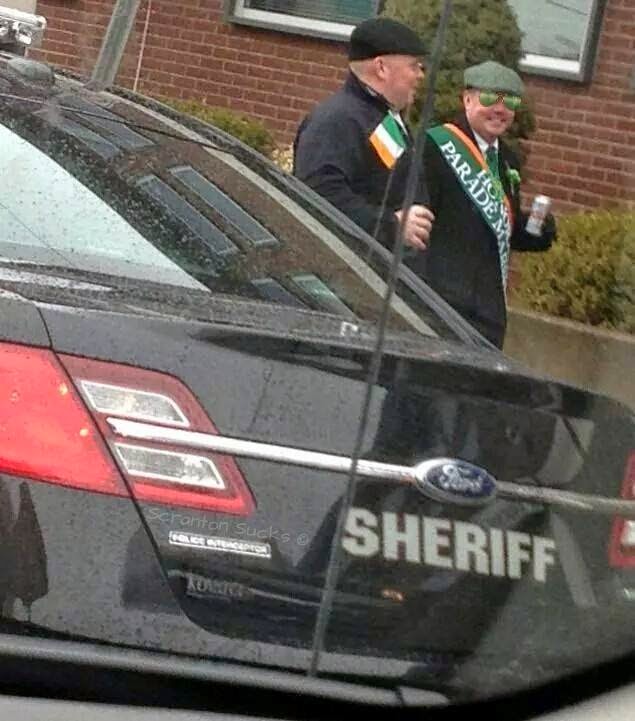 For the record, the City of Scranton has an "open container" law, which means that you are not allowed to drink alcoholic beverages in an open container in public.  As if the above picture couldn't get more ironic, consider the fact that it's taken in front of a former Catholic high school (the one that I graduated from actually).

For more fun information about St Patrick's Day, check out THIS ARTICLE from the Huffington Post.

Created By Stephen Albert at 7:22 AM