Pain in the ___...Well the age 50 colonoscopy has come and gone, and I'm very glad that it is gone.  It's not a difficult test to get; in fact the test itself is almost anti-climatic.  Why?  Well you get there, you get changed, the put in an IV, you sign some papers, you talk to a bunch of folks, you get wheeled into the procedure room, they give you oxygen (which makes you feel really good), you turn on your side, they turn on the "joy juice" into your IV and then you wake up and everything is done.  Now the getting ready for the procedure is the difficult part, but hey, it's pretty infrequent and the payoff is worth the cost.

Oh, and for me it only takes about a week for my digestive system to get back to normal.

On a related note, I can't thanks Ms Rivers enough for her help and support during the preparation time.  It's a process that can make one, well, cranky.

Let's hear from some experts on the subject:

Corey O'Brien...The countdown is in progress until we hear about the soon to be former Lackawanna County Commissioner's new private sector employment.  As I've already noted, I'm putting the odds at better than 50/50 that this new employment opportunity will somehow be connected in some manner to a certain Dunmore-based businessman who desires to build a mountain out of garbage.  Just a hunch.

Got Evaluations?...My least favorite time of the year is when the annual performance management process is completed via year-end performance appraisals.  I don't mind writing them, but I do mind receiving them.  Smarter people than I have written scholarly articles about why the process is antiquated, de-motivating, etc., but for me it operates on a much more basic level:  I don't find the discussions fruitful.  By the time this season rolls around, provided that my manager has done even an adequate job, nothing on my year-end performance appraisal should be a surprise.  So what's left?  Basically a "greatest hits" reel of the year's accomplishments, some constructive feedback that is more or less on point, and some information on compensation changes.  A better way?  How about consistent and honest feedback on performance spread throughout the year instead?  Then maybe we can go out for pizza and celebrate the past year.  Oh, and just send me an email with the money stuff.

The Quiet Don...is a book I am just about finished reading.  Highly recommended. 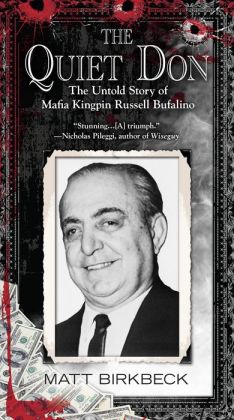 If you want an insightful look into:  1) How organized crime worked during the 50's-80's and 2) Why Northeastern Pennsylvania was (and still is to an extent) a pit of corruption...then you will find this to be a great read.

Wedding Planning...Yes, I am helping to plan a wedding (my own), and I will say that the process is mostly enjoyable.  I'm a detail-oriented/project management kind of person (as is Ms Rivers), so keeping track of the moving parts isn't all that difficult.  Among the things I have enjoyed so far has been planning the music.  We are having a piano player for the ceremony and cocktail hour afterwards, and then a DJ for the reception.  We've also been working on a list of music for something like a year already.  It's very easy how the skills that both Ms Rivers and I bring to the table compliment each other; she is a musical person in fact, as she plays the guitar (and I suspect a little piano as well), so she knows all the classical stuff.  I, on the other hand, have no musical ability what so ever.  But I do enjoy contemporary music, so I can fill in the music where the need is for something, say, post 1800.  Here's an example of how it all works:  We were talking about this traditional wedding piece, which I learned was Pachelbel's canon in D.  I just liked the song...Ms Rivers doesn't...but over and above that, I giggled for 4 minutes when I discovered that the composer's name is pronounced as "Pach - A - Bell" (honestly, I didn't know before this; I'm a science guy)...so of course I called him "Taco Bell" for the next hour.  Oh, and no, there will be no Taco Bell at the wedding...from a music or culinary perspective.

To end this on a high note, here is the piece from Taco Bell, I mean Pachelbel...

Created By Stephen Albert at 10:36 AM

I've been trying to pick-up a bunch of books to read through this year, and I've been eyeing that one for a while. I think I may pick it up this afternoon while I'm out.

Also: I had no idea that you were not married. Maybe I missed something along the way. At any rate, congrats! I'm sure your ceremony will be dazzling.

Thanks for commenting. You'll love the book...very easy read actually very thought provoking, especially with the landfill expansion looming over NEPA. It makes you wonder if this is going to be the whole gambling license "fix is in" all over again.

Thanks also for the congratulations as well! I'm not sure about dazzling...but I'm instead shooting for "good & music".

Steve - I am sure I will love this book as I read "I Heard You Paint Houses" and was intrigued by the whole Buffalino/NEPA connection. I always get a big kick out of mob/mafia movies and books.

That's on my short list to read Michelle, especially now. The great thing about these books...I suspect...is that they really do indirectly answer so many questions.

For example, just why is NEPA such an undesirable place to do business? We've had the highest unemployment rate in the state now for years. This isn't an accident. And remember...this means that the economy is worse here than in such Hell holes as Erie, Altoona and the like. Why? Could it be that many private sector employers know full well the history of graft that is NEPA?