Mail Chimp...There is a business called "Mail Chimp".  I heard of this business while listening to public radio, where they underwrite content during the program Morning Edition.  I'm not sure whether I think the name "Mail Chimp" is brilliant or incredibly stupid.  I do know that I am giving them free advertising simply by writing about their name, so perhaps it's closer to brilliant than it is to stupid.  Regardless, you can check out the Chimp HERE.

The House of Representatives & Obamacare...Well after at least 40 votes to de-fund "Obamacare", the House of Representatives has ratcheted up the game and will basically not allow the government to pay its bills...bills they agreed to pay by the way...unless they get their way.  Personally I am hoping that, when this tactic fails (which it will), The Tannest Man in Congress will next demand that "Obamacare" be de-funded else he will hold his breath until he get his way.  I know, that sounds silly, but then again passing a budget but then refusing to pay for it is just as silly.

Obamacare...Speaking of "Obamacare", I don't consider myself a fan.  I've never considered myself a fan of the plan actually.  What I find fascinating is the fact that many conservatives who adamantly oppose it don't realize that underlying concept of requiring the purchase of private health insurance was first proposed by the uber-conservative think-tank the Heritage Foundation.  According to Fox News (yes, Fox News):

"The mandate, requiring every American to purchase health insurance, appeared in a 1989 published proposal by Stuart M. Butler of the conservative Heritage Foundation called "Assuring Affordable Health Care for All Americans," which included a provision to "mandate all households to obtain adequate insurance."Read more: http://www.foxnews.com/politics/2012/06/28/individual-health-care-insurance-mandate-has-long-checkered-past/#ixzz2fQk50V9c

While I don't agree with parts of Obamacare, I have little sympathy for those in power who sat around for decades and ignored the problems in our health care system and did NOTHING to fix it.  What would I like to see?  First, Republicans need to stop the silly-assed attempts to un-do history.  Second, the President needs to be open to making changes to the law.  Finally, both parties need to agree that any solution needs to insure that individuals have personal accountability for their health care while acknowledging that health care isn't a luxury, it's a basic human right.  I'm not holding my breath.

Rick Santorum...has endorsed Governor Tom Corbett for re-election.  Now I am sure that will resonate with voters...maybe the 18 of them in Pennsylvania that care what Rick Santorum has to say about anything.

Mulligan for Mayor...I am voting for Jim Mulligan for Mayor of Scranton, and I encourage others to do so as well.  Why?  Because voting for his opponent is the same as voting for the status quo.  Yes, Bill Courtright is a nice guy, but I am absolutely, positively convinced that he will bring nothing different to the office.  Nothing will change.  Municipal unions will still be running the show and Scranton will still be teetering.  Enough already.  The definition of insanity is doing the same thing repeatedly and expecting a different result, and it's time in Scranton for a different result.

Speaking of Scranton...I love Scranton.  I really, really do.  Scranton is a great place to live, which is precisely why I find the local political scene to be so repugnant.  For far too long, Scranton's government has existed for the sake of itself and for city employees.  We lose sight of all that's well here because of the ineptitude of a few in "power".

School Strikes & School Districts...I've been working on a posting related to school strikes for a while now.  I just can't seem to finish it though.  Not sure why.  Maybe because the whole issue is so, well, "soiled".  You get that when you combine inept school district directors with greedy union leaders.

Foodstamps...are used by about 1 in 7 Americans.  That's too many.  But addressing the underlying problem by simply cutting the program is wrong-headed.  Yes, I do absolutely favor weeding out graft in the program, but using a chainsaw to lob an amount off the top runs risk of harming those the program is designed to help.  What's more, if Congress is REALLY interested in reducing the budget deficit, why don't we first start looking at our military spending?  Over 40% of the world's military spending is done by U.S. Taxpayers. 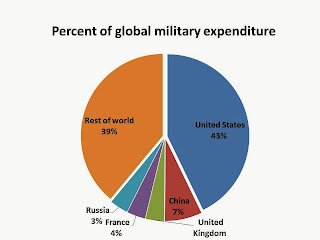 The above equates to about $700 billion in 2010.  What did the Foodstamp program cost in 2010? Less than 10% of defense spending, or about $68.3 billion (reference HERE).  If we don't want to be the world's police force, and we can't afford our government, then it's time to look real hard at where we spend our money, largest expenditures first.  By the way, here's the whole budget picture for 2010: 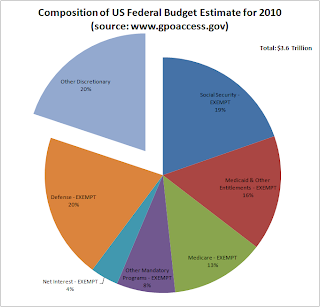 Note that, in theory at least, Social Security funds itself (well actually the government has borrowed money from Social Security, but that's another topic for another day).

Created By Stephen Albert at 7:48 AM