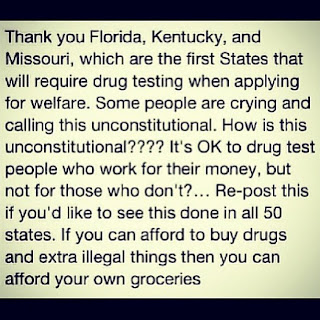 I see these graphics on the Facebooks all the time, and for the most part I don't give them so much as a passing thought.  However, mostly for my own ammusement, I'm going to give this one a passing thought (or two).

1) Potentially a waste of money, if done haphazzardly.
2) Harmful when children are involved.

To point #1:  I'd like to see a cost/benefit analysis of a potential drug testing programs.  What would it cost, and how much would be saved in terms of denied benefits?  I imagine the testing could be done in a random manner, and if there was competitive bidding for the testing contract(s), then maybe the overhead would be sufficiently low.  But there are a lot of "if's" that last sentence, and let's face it:  governments are not known for either efficiency or the low bidding of contracting.

To point #2:  What happens if, under a testing program, an adult with children is denied benefits?  Would not innocent children be negatively impacted?  If parental benefits are reduced, but benefits maintained for the children, then what's to stop the parent from taking money designated for the children and using it to buy beer and menthol cigarettes instead of food and clothes for the kids?

In the end, the issue here isn't one of constitutionality, it is a matter of common sense and compassion.

It is common sense, in my book, for those receiving governmental support to basically be held to a minimum standard of "you can't break the law".  The real question is this:  so if you catch them breaking the law, then what happens?  That's where the issue of compassion comes into play.  I don't have a ton of compassion for people that make the choice to use illegal drugs, as adults are responsible for their own behavior.  Children, however, are NOT responsible for the behavior of their parents, and they should not suffer because Mom and/or Dad are mentally weak and therefore feel compelled to take drugs in order to escape reality.

This is a classic "knee-jerk emotional reaction" kind of thing.  We can do better.  Now what would "better" be?  Well I don't really know, and to be honest, any solution drummed up by an idiot writing a blog probably wouldn't be all that helpful anyway.  However, at the core of any solution is to first identify the real issue to be solved.  In this case, I can guarantee you just one thing:  the REAL issue is absolutely, positively isn't "angry taxpayers".
Created By Stephen Albert at 12:02 PM

And people that get food stamps are buying steaks and lobster.

There is a store in Scranton, "Mr Z's" where it seems that the majority of food stamp recipients purchase their stuff. I don't go there all that often, but when I do I've never seen lobster and steak on the belt in front of me. Now I've seen people use food stamps to buy cereal and then whip out cash for smokes, but that's a different rant for a different day.