When was the last time, prior to last night, I attended a high school football game?  The honest answer is as follows:  I really don't freak'n know.  It has been that long.

And so the stage was set yesterday when I got the call from Ms Rivers wondering if I would be interested in attending yesterday evening's Wyoming Area vs. Northwest Area football game.  I confess that at first my answer was "no", as I was still at work, had to deal with an a setback on one of my projects, was facing a trip to CVS to score some 'roids for my asthma (which is acting up due to my lingering cold), and I had a business continuation planning (BCP) test for work to conduct at home.  In short, I felt stressed.  Fast forward about 20 minutes and I am leaving CVS, thinking to myself "screw it, I can leave the game, get home by 10pm and complete my test well before 11:59pm" (the BCP test had to be completed on Friday).   So, to make a long story short, I found myself navigating the backstreets of West Pittston PA, looking for a parking spot outside of Wyoming Area's football stadium.

Now for the record, I need to explain my knowledge of, and experience with, high school football.  That would be "none".  I attended Bishop Hannan High School in Scranton, which was notable for being "Tech with ties" (translation:  Scranton Central HS was to the Jesuit Scranton Prep HS...the "smart" schools...as Bishop Hannan HS was to Scranton Technical HS...the "dumb" schools) and for not having a football team.  I'll also note that, at the time of my graduation, I was 6'3.5" tall and weighed about 170lbs...in other words I was more of a goalpost than football player.  Making this even more of a knowledge disaster, Ms Rivers is a graduate of Philadelphia's Girls' High, meaning that her knowledge of high school football is about as laughable as mine.  But man, we both know a hell of a lot about the pension business.  Anyway, the stage was set.

After finding my partner in (un)knowledge, I proceeded to take in all that is high school football.  A few observations: 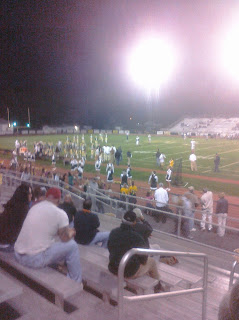 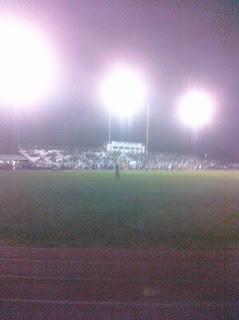 In the end, I was very glad I attended.  It was as much an exercise in Sociology as it was anything else.  It was also just nice to be outside on a nice Fall evening with my partner in crime.  A splendid time was had by all.

For the record, I did complete the BCP test, with time to spare.

Oh, and Wyoming Area won the game.  Details HERE.
Created By Stephen Albert at 11:08 AM