My life is (nearly) complete: I got to see a DeLorean.

One of the greatest cars ever made was the DeLorean...the same car used by Marty McFly for time travel in the Back to the Future movies.  While shopping for a car yesterday at Nationwide Car Sales in Wilkes-Boro, I was astounded to find none other than a DeLorean in the showroom.  Apparently the car belonged to the owner of the dealership (who also owns Ken Pollack Nissan and Ken Pollack Suzuki) and was not for sale.  The vehicle was completely restored and had a hair over 1,000 miles on  the odometer.  Since I was spending a fair sum of money on a car at the dealership and since we had some time to kill with the paperwork associated with buying a car, photos were taken. 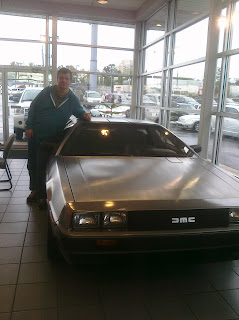 Up close with a classic car.  The stainless steel exterior is way cool. 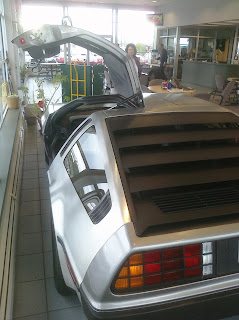 Gull-wing door!  The doors actually don't take much side room to open; as you can see the driver-side door is actually really close to the wall, but yet opened with room to spare.  Pay no attention to the stranger in the background. 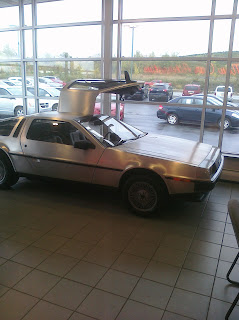 Sadly, this DeLorean did not have a Flux Capacitor.  The gas fill is actually right in front of the windshield. 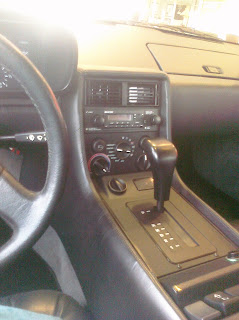 DeLorean interior.  Cutting edge stuff for 1981.  You end up sitting so low in this car...literally just a few short inches off the actual ground. 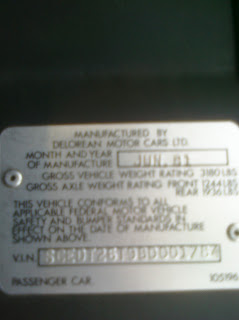 Manufactured June 1981.  Some of the dealer guys told me that the DeLorean used a Volvo engine. 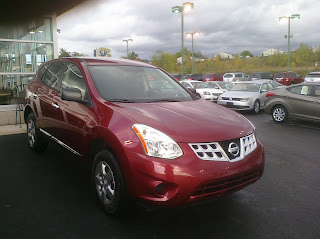 The actual vehicle I ended up buying:  a 2011 Nissan Rogue.  I am really happy with the choice.

While I have been looking at/reviewing cars for several months now, yesterday was the first serious day of car shopping.  We stopped at Nationwide, as Ms Rivers had previously purchased her car there.  We ended up looking at three different vehicles (all were AWD, all were 2011 model year vehicles and the Toyota & Nissan both had a locking differential for really bad snow):
In the end, I sacrificed some cargo space for far better handling.  Note that Consumer Reports rates both the RAV4 & the Nissan as being very reliable.  Coming from a very logical mind this next statement may seem out of place, but I'll say it anyway:  I also really liked the color of the Nissan.

Many thanks to my partner in crime, Ms Rivers, for helping me with the decision making process.

New car and a DeLorean:  'twas a good day.

Created By Stephen Albert at 11:02 PM

Email ThisBlogThis!Share to TwitterShare to FacebookShare to Pinterest
Labels: Cars