They (Obama and Romney) BOTH stretch the truth & outright lie.

Great opinion piece from FoxNews the other day.

What Americans Know But Romney and Obama Do Not

I am amazed at how blindly supporters of both candidates glaze over outright lies by their camps...

...the President's campaign assertion that Mittens basically killed some poor old lady's husband [He didn't, by the way]

...Mittens "I built this" bull$hit which wildly takes out of context what was actually a pro-business comment by Obama

Relatively bright people fall for this nonsense.  It's as if the collective intelligence of the American people drops by 15 IQ points the closer we get to election day.  Oh, and let's not forget the extremist surrogates on both sides:

The Occupy Movement
The great unwashed on the far left who want you to believe that it is somehow immoral to be successful and tweet against "the man" (using their assembled by Chinese slave-labor iPhones).  Got hypocrisy anyone?  I work in the private sector.  I work in financial services.  I am also damn proud of my employer, as we make far more of a positive difference in the world than a bunch of kids in tents ever will.

The Tea Party
Oh yes, the "we are against borrow-n-spend big government" (now that Bush 2, who paid for two wars on credit, is out of office).  Funny, where were these guys when Bush wasn't counting the cost of the wars in his budget projections?  That's a far worse accounting trick than anything Obama has done.  Again, got hypocrisy anyone?  Oh, and the Tea-Baggers provide safe haven for racist swine.  There, I said it...they do.

Now do I sound disgusted?  Yeah, I do, because I am.  I really, truly want this election to be over with.  Truth be told, I will do just fine no matter who wins.  I am, in fact, better off now than I was four years ago, but that has nothing to do with anyone's efforts other than my own.  I will continue to pay taxes, I will continue to speak out on what I think is right (and what I think is wrong) and I will continue to work hard to live the best possible life I can.  None of this, by the way, will be supported by the Democratic Party, the Republican Party, the Federal government, some labor union or anyone else other than myself and those close to me.  Sorry Rush, but it does take a village...it's just that the village consists of yourself, your family and your friends...not Obama, Mittens, donkeys or elephants.

It all kind of makes me wish I still had this tee shirt... 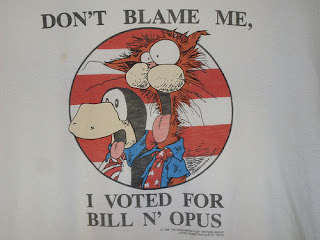 Created By Stephen Albert at 5:54 PM