A special note to the anonymous individual who keeps leaving comments...

...on my post about that rag known as the "Stars and Bars":

I very well might debate you as to the "real" causes of the Civil War.  I just have one requirement though:  please comment under your own name.  Why?  Well while I do allow* anonymous comments, I can't say that I actually respect people who write things anonymously on the Internet, with very few exceptions.  How can I respect someone who says "I have this conviction" while at the same time also saying "but I don't want to be identified with this conviction"?  It's a silly contradiction in terms, and I'm being kind by using the word "silly" as a descriptive.

So either continue to comment anonymously and not expect any kind of response from me OR comment under your own name and I might actually respond in kind.  My $10/year, my rules. 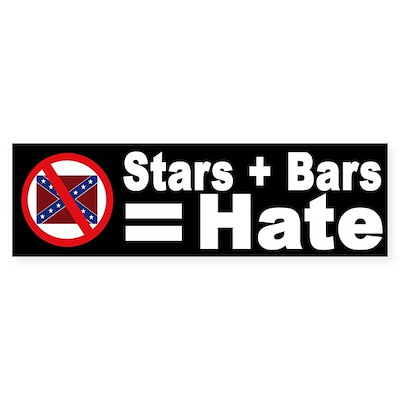 Available for sale HERE in case you want one for your very own.

Have a Nice Day!


(*) This sounds so haughty, namely that I "allow" anonymous comments.  In point of fact, when it comes to run-o-the-mill comments I could care less:

b) whether the comments are anonymous or not.

Remember, I don't do this to entertain anyone other than myself.  Other than deleting comments that are just thinly disguised spam (for example, I've deleted countless comments from law firms every time I would blog about my own divorce) & blatantly offensive hate speech, I pretty much don't give a rat's posterior what anyone writes.  Just don't expect me to react like Pavlov's dog just because your decided to grace me with your wisdom.
Created By Stephen Albert at 8:50 PM