One of the great things about vacation is that I can simply ponder to degrees that even astound me.  That says a lot, as I do enjoy pondering.  This noted, one of the things I have been pondering lately is technology.  Not technology is some grand psuedo-sociological manner, but just technology in the sense of what works...at least for me...and what does not.  For me, this is grand stuff. 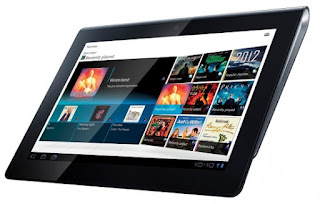 About 8 months ago I purchased a Sony S tablet.  In fact, it's the device I am using to create this posting.  Well the Sony S tablet and a Logitech Bluetooth keyboard (to be precise), plus a few other accessories.  In these few months I've come to a few conclusions about what tablets can do well and where there are limits.  Now I'm speaking purely of an Android experience, but some of these thoughts are easily transferred to other platforms, such as Apple.  As noted below, all tablets have certain physcial limitations.

What a tablet can do well...
...present media.  My Sony has a great display (Sony products typically have great displays) and pictures are sometimes breathtaking when viewed on my 9 or so inch screen. Audio sounds pretty good on the tablet.  Video can be very good, as long as it is accessed from a file; on-line streaming video can be problematic for any wireless device.
...reading books.  I only have a few titles on my tablet, but the screen and shape of my tablet is almost perfect for reading.
...light duty web surfing.  Just don't push things to the limit or expect too much in the way of page interaction.
...provide applications that can be helpful.  I have a ton of apps on my tablet, some of which (such as my HAL 9000 app) are just for giggles, others (such as Evernote) are actually useful.  The coolest app for my tablet?  It can function as a universal remote control.
...games.  There are tons of very cool & time-wasting games that really are optimized for a tablet form.
...be small and convenient.  My tablet is an awesomely portable device.  Collectively my tablet, keyboard and one or two other accessories take up less room than my work-provided Lenovo Thinkpad.

Where a tablet falls short...
...Productivity.  I know that some will argue this point, but the simplest of copy and paste actions are more difficult on a tablet.  What you can using a mouse with an incredible degree of precision and speed is much clumsier with a tablet, no matter who makes the tablet.  Even the smallest of fingers is far less precise than a laser-guided mouse cursor.  This is a very, very big deal to me, as I had hoped that my tablet would actually replace the need for a laptop and/or netbook.  When it comes to things like writing, the process is less efficient on a tablet, and I do a lot of writing (both for work and personal reasons).  Now there are limitations to my tablet that are self-created by me in the sense that I probably haven't expended enough learning curve energy, so I will not mention things like spell-check.  Also, there are voice-to-text apps out there, but anyone who does any writing ever will tell you that sometimes the greatest efforts in this kind of endeavor are not in the creation but rather the editing, where voice-to-text isn't all that useful.  Yes, predictive text is helpful, but it is mostly for the "hunt and peck" types out there (as opposed to those of us who actually learned how to type).
...form factor.  What is small and portable on one hand is also sorely lacking in input options in the other.  Mouse comment already noted, even a good keyboard such as the Logitech that I am currently using is less efficient and effictive than the wireless keyboard I have for my desktop.  Forget the virtual keyboard that all tablets come with...sorry, but fingers that are attached to hands that can palm a basketball simply don't work with on-screen keyboards.
...manage files.  One of the things I used to do on my netbook (my pre-tablet portable device) was use it to manage files.  I could edit photos from one flash drive and save them to a portable Seagate drive where I keep all of my backups.  It was great stuff.  That kind of thing is physcially impossible with a tablet that barely allows you to connect a single flash drive, provided of course that the device is not required to be powered by the USB port.  I can hear the counter argument now:  "Man, but what about clouds?  You should be saving documents to a cloud!".  Yes, I do use cloud storage, but there are times (such as right now) when I don't have a great Internet connection and as a result the "cloud" is mainly just vapor.

It depends on what you really want to use a device for,  a conclusion that I know isn't very inspiring.  As I used to tell my daugthers, tools are designed to be used certain ways; for example, you can use the body of a $150 Lithium Ion cordless drill to hammer nails, but that doesn't mean you should use a $150 Lithium Ion cordless drill to hammer nails.  This noted, if you want a device for reading books, looking at photos, surfing the web, updating Facebook (just don't expect to do anything complex using Facebook) or checking your email, then a tablet is a great device.  If you want a portable device for anything other than the most rudimentary forms of productivity, then I suggest getting a laptop or netbook.  The latter is best if you really care about a small form factor.

As for me, I susupect that at some point I will probably get a very small laptop in the future.  I'll most likely keep the tablet, but I don't think that I will be using it as much as I thought I would when the thought of purchasing it first popped into my head.
Created By Stephen Albert at 8:28 PM

Email ThisBlogThis!Share to TwitterShare to FacebookShare to Pinterest
Labels: Technology

This is my biggest worry. I am afraid that after shelling out all of the money on a tablet, I'll still be inclined to use my laptop. I know that my kids would love to use a tablet, but they aren't exactly responsible with expensive electronics at this point in their lives.

In hindsight Michelle, I wouldn't have bought it. Mind you I am glad I did in a sense, as now I have some insight into what the technology does...and does not do...well. In terms of actually having a tablet as an uber-productive mobile device? I'd suggest buying a well constructed small laptop or netbook instead.