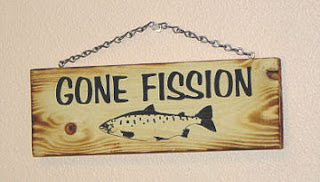 One of the neat things that one does while on vaction is indulge.  One of the neat things about being a real, full-fledged adult is that you can sometimes Indulge in things that you actually want to do.  Nice combination.
Well today I indulged in the guise of fishing (not "fission", but I love way that sounds).  Now that doesn't sound all that remarkable, exept for the fact that I don't think I've gone fishing in something like, maybe, 30 years.   I have nothing against fishing by the way.  Well almost nothing.  As a general rule in life, I don't like to kill things unless absolutely necessary.  "Things" include all manner of critter, from wasps (not WASPS, although I will not kill them either) to stink bugs, to worms, to furry animals, to scaley animals to, well, fish.  These just aren't words...they are actions.  For example, people in the office know that I will not kill that stink bug flying around the window, but rather will always do a catch-n-release.  Sometimes I think they just don't tell me about such things anymore, just so they can in fact kill the critters behind my back.  Anyway, I don't believe that I should be destroying something that is alive.  I accept the contradiction of eating meat, but in fact that is someone else doing the killing.  By the way, I have nothing aginast hunting if the hunter in fact consumes that which he kills.

Philosophy on killing critters noted, it does present something of a problem for an activity like fishing.  So why did I go?  Well one of my traveling partners this week is a dyed in the wool fisherman, and seeing as though this is an activity that I haven't partaken of in so very long, it seemed like a fun indulgence.  I was right by the way, it was fun.

We signed up for a half day fishing expedition out of Lewes, Delaware, on a boat with about 15 others.  They supplied the boat, the bait and the rods/reels.  I wasn't thrilled about the prospect of having fishy smelling hands by the way, as I am almost anal retentative about hand washing. But so it was, I baited my own hooks (cephalopods, chopped into pieces + smaller millow like fish) and actually handled a fish or two.
How successful was I?  Well I actually did catch ONE fish during the half day on the Delaware Bay.  The victim was Bluefish, of a size that I can't even begin to estimate, other than "modest".  My partner in crime caught far more:  several Bluefish, Sea Trout, Dogfish, and a Pufferfish.  Okay, I will not be ending my day job to become a professional fisherman, but still, I have to confess that it was fun.

I did, by the way, basically suck up the moral quandry of not wanting to kill stuff.  My travel partner brought back one Bluefish and a Sea Trout; my Bluefish was donated to the crew of the boat, who basically keep whatever the fishing noobs don't want to keep (including the Pufferfish, which in these parts are not poisonous and are "good eating").  I would have preferred to release Mr Bluefish back into the wild to be caught again, but it just wasn't in the cards, and in life one must be flexible.

As I get older, I am faced with the question that many older gentlement must eventually face:  golfing or fishing?  I have a few years yet to decide, but I'm leaning more towards fishing at this stage.

Created By Stephen Albert at 5:40 PM