I think the above is an actual title from some 50's or 60's song, although I'll man-up right now and state that I'm not motivated enough to actually look it up.  I mention it though because yesterday morning an iron (as in the clothes variety) and I had a close encounter of the singeing kind.

The target was the finger next to my thumb on the left hand.

So what's the connection? Well I have to confess that I am something of a klutz.  Uncoordinated if you will.  Quasi-accident prone.  Lacking any sense of dexterity and basic rhythm to be kind. 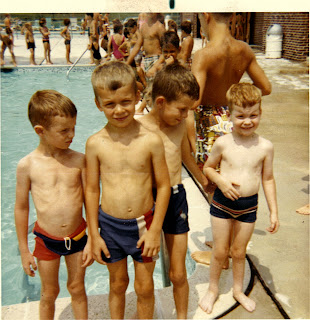 As a kid I did endure some rather light-hearted banter from my brothers on this very subject.  Sure, each of the "Brothers Albert" has his own special skill, but in addition to that I had my own special anti-skill, namely the whole klutz thing.  The reasons for this are at least somewhat clear...

...I am just a big person (6'3") with big, duck-like feet (size 13 wide)
...I don't have good depth-perception
...I'm not a person who can dance or has any natural sense of rhythm
...I am perfectly willing to be casual when handling things that are hot, sharp, etc.
...I distract very easily (Squirrel!)

...all of which equates to a propensity towards band-aides and neosporen.

Take this year for example:  now in 2011 alone I have managed to break some ribs (falling on ice) and burn a finger.  I blame (mostly) ice for the whole rib fiasco (which meant that I spent February in some real serious pain) and I blame my eyesight for the iron incident yesterday morning.

On the good news side, I haven't managed to fillet myself yet this year with a box-cutter, but then again I haven't gotten around to replacing those ceiling tiles in the kitchen either.  I suppose that I should be both more grateful and cautious at the same time.  Note the word "suppose".

So I'll end this by noting for the future that anyone who ends up spending significant time with me going forward should come prepared with basic first aid skills.  Oh, and don't ever let me separate frozen hot dogs with a sharp knife.  Been there, stabbed that (with "that" being my right hand, a few years ago).
Created By Stephen Albert at 8:29 AM