Blogger Geek...For the benefit of basically just myself, I've made a few tweaks to the page, including the addition of a new photo (more on that in a bit) and a title bar.  I know, not exactly Earth-shattering news, but then again I make a concerted effort to not change page elements all that often.  Actually I really like the current NCFE layout, and the title bar was added basically because I don't feel like wrestling with Photoshop at the moment.

Morris Arboretum...As referenced above, I added a new photo to the blog title.  This particular photo was one of about three dozen that I took while at the Morris Arboretum yesterday.  Specifically, the photo is of a fountain that is a replica of one at a mosque in Spain.  How do I know this bit of detail?  Well that's courtesy of a terrific guide who indulged me as I was constantly snapping photos while asking all manner of silly questions and making countless mundane comments.  I was at the arboretum yesterday and it is a heck of an impressive place.  Drizzle aside, it was a great day for walking around all the beauty of nature combined with a few very well placed man-made structures.  Making it all the more striking is the fact that this place is in the greater Philadelphia area.  With a daughter going to West Chester University in the Fall, I have a feeling that there may be a return trip to the arboretum in my future.

Another photo from the trip... 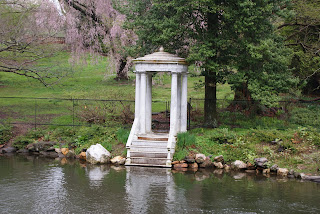 Many thanks to both generations of Mrs Rivers for the tour.

Easter @ Home...Today is Easter Sunday, so I suspect I should make a comment or two about the holiday.  Or maybe I shouldn't.  Oh heck, why not?  I'll first state that I haven't gone to church to celebrate the season.  I'm not opposed to going to church for this or any other reason, but circumstances were such that I'd end up having to go alone, and well I've made a vow to myself that there are just certain things in my life that I simply refuse to do solo anymore, with one being the aforementioned church attendance.  There are other things that fall into this category as well (walking around Lake Scranton is another), but they all center around a common theme of trying to change old habits, patterns of thinking and ways of going about my life.  If Easter truly is about rebirth, then perhaps is rather fitting to be talking about changing old (bad) habits, such as those that invoke feelings of loneliness and general patheticism (I know, that isn't a real word, but think "the act of being pathetic"...hey, it's my daughter that is the English major, not me).  A church and I will become reacquainted at some point in time in the future.  For the time being though I'm just going to go on the premise that God simply understands.

On a Lighter Note...since this posting has taken a decidedly serious turn, I'm compelled to end it on an every so slightly lighter note.  Or* maybe not, depending on your perspective.  Anyway, here are about five minutes of some of the best music ever recorded by human beings.  From Abby Road...


(*) By the way & in response to a comment I received, I do realize that it is improper to start a sentence with a conjunction.  In fact I know that there are many English-language rules that I break all the time.  I'd like to think though that it's a bit more acceptable to break a rule if you at least realize that you are breaking it in the first place.  Or so I tell myself.
Created By Stephen Albert at 6:59 PM