The Things We Can't Leave Behind 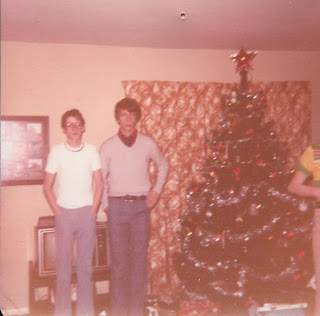 I'll cut right to the chase:  There isn't a day that goes by in my life when I don't think about my late brother Chris.  As in no matter what I am doing, no matter where I am, there are always thoughts about him pinging around in my head.  Some of those thoughts are probably best described as "whistful", as in thinking about what our lives should have been or what he would be thinking about relative to some current event.  Some of them are sad.  Some are just, for a lack of a better word, perplexing to the point of mental exhaustion, as I still really can't fully grasp just what happened 4 years ago on January 5, 2017.

If you are at all wondering just what the hell I am talking about you can click on this link:  http://www.sgalbert.com/2017/01/my-brother-chris.html

Yes, 4 years later and part of me just doesn't understand what happened, and that runs counter to all of my emotional and intellectual programming, as by and large I ALWAYS HAVE TO UNDERSTAND.  I have to be able to make sense of my world and what's happening in it to some degree, as any loose-ends gnaw at me like a beaver on a birch tree.  I need understanding and order in my life now to balance what I experienced growing up.  Yet though on another level the death of my brother does not now, nor will it ever make any real sense.  What's more, one of the few bits of saving grace in my childhood was the fact that there were 3 others in the world who could understand this to one degree or another.  Now my youngest brother has settled into a world and routine where maybe these things don't matter as much to him now, which I think is a good thing.  That means now there is really only 1 other.

There are times when I honestly just wish I could break down into a puddle of emotional goo over what happened, knowing that at least then maybe I could hit the emotional re-set switch of sorts.  That doesn't work though for me.  I somehow believe that I was fated to find my brother in January 2017, precisely because that was better than others finding him.  You see, that almost stoic, restrained, logical person that I am is well equipped for calming the emotions of others during trying times.  Yes, I do the crisis management thing really well.  Yet that comes at a high cost (as John Mellencamp once wrote, "I do things my way, and I pay a high price"), namely a kind of emotional governor that I can't seem to disable.  I am left with trying to use logic to describe feelings that are inherently illogical.  It's a vicious cycle.

For the record, I don't know what actual purpose this posting serves.  It's not actually even a half-way decent tribute to my late brother (you can click on the link above for that).  If anything, it's the kind of rambling insider stuff that part of me wants to dismiss.  However, this seems to be what I can manage to scrape together from the jumble of feelings I can't seem to fully process all that well these 4 years later.  I also get the impression that I'll be able to write this same posting 10 years from now, as the fundamental conflict at play, namely my needing to be "in control" vs. the very "out of control" feelings I have buried deep down are not likely to be resolved.  Simply put, I'm not likely to change all that much, and Chris is not coming back.

In the final analysis, what is clear is this:  I just wish he was still here.

Created By Stephen Albert at 9:28 PM