Life is What Happens

Last week was, in a word, terrible.  Granted, it was terrible for many of us, but I had two extra things going on, in addition to the terrorist attack at the United States Capitol:

As a general rule, I do my best to protect the privacy of others on the page, and that will continue for my stepsons.  I will note though that they had a complex relationship with their father, which is something I knew about going into my relationship with Ms. Rivers.  Based on that, and the advice of Dr. Gordon Livingston (in one of his books...), I made the decision early on that I would work hard at being a positive part of their lives.  Time will tell if I have been successful with that goal.
For the record, I didn't attend the funeral services.  This was in part because I viewed my possible attendance as being both disingenuous and a distraction.  The disingenuous part comes from the fact that I could not honestly honor the life of someone who caused pain to people I love.  I know though that there were good times in that family in years past, so it is entirely proper for others to come and pay respects.  But not me.  I did though contribute to the effort in other ways, including editing the photo for the obituary.
I am reminded though by last week's events that sometimes great pain...and even death...is part of the cost for a new life to begin.  That could be a new life for a nation that struggled for four years under the divisiveness of a malignant narcissistic leader.  Or a new life free from the what-if shackles of a non-supportive parent.  To that second point, well, I have some experience.  If you were to ask me how I felt when my own father passed away, my immediate answer would probably be "glad", as he was finally wrenched free from his physical and emotional pain, and at least one of his sons (me) was free from trying to understand why his father was never capable of actually being a father.  I know that's pretty dark, but on the other side of that passing is a kind of peace, as some memories do soften with the passing of time and (hopefully) the wisdom of age.  I hope that turns out to be true for my stepsons as well.
It's also time for life. 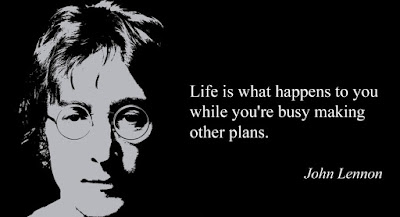 Sometimes when we're going through difficult times it's hard to remember that this is life.  That our life is ticking away.  By all means, we have to do the hard things of life, including losing people close to us, but we also can't get so focused on the trials that we miss everything else around us.  Life does not pause for us.  Life is always happening.
Created By Stephen Albert at 10:46 PM