Stand Up In A Clear Blue Morning

Tomorrow at noon will feel like a brand new day.  At least for many of us.
Four years ago, during a November vacation that happened right after I was "retired" from a company I had planned on retiring with, my wife and I watched election results in horror.  A man who had basically failed at much of what he had done in life...two failed marriages...six failed businesses...was going to the be next president.  From that point on, it honestly felt as if there were a cold wet blanket on this nation.  I wasn't proud to be an American.  I watched with a kind of downward head-shaking acknowledgment when he promoted racists and demoted those allies we had that shared in our supposed national values.
Last November, there was a kind of glimmer of hope if you will that maybe, just maybe, we might get a new president.  A president that didn't, for example, rage-tweet in the middle of the night.  Even then though, I basically still wasn't sure it was going to end.  The tweeter-in-chief's campaign of countless lawsuits succeeded in planting some doubt in my, and I am sure others, minds.
On January 6th of this year, we had a kind of crescendo of sorts, when all the ugliness of a failed president and his supporters had their final stand.  A Waterloo worthy of any dictator.  While those events are a stain on this nation, they also gave me though something that was lacking:  A real sense of hope.  After January 6th, I knew it was truly going to end.
As I write this now, Joe Biden will be the new President of the United States of America in about 14 hours.  It feels like I can finally exhale after four long years.  In something of an interesting bit of synchronicity, I now find myself a few months into a new job where I very well may be until retirement.
Lastly, I offer this...
What do the President of the United States of America and the author of this blog have in common?
We were both born in Scranton, Pennsylvania!
#ScrantonProud! 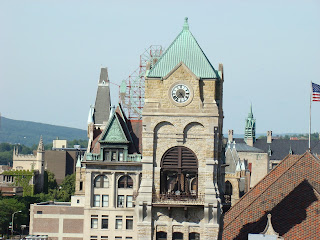 Created By Stephen Albert at 9:49 PM