...is the span of time between leaving my last job and my hopefully last first day at work.

By way of background, "leaving" sounds a bit like I just left the office and just decided not to come back.  That wasn't the case.  What is the case is that I, like far too many, had my employment negatively effected by COVID-19.  In fact, I think my last departure was as hard on my former VP as it was on me.  Anyway, in the real world things happen, and it's less important to dwell on the past and more important to focus on the here and now.

I am, by the way, going to dwell a bit on the past regardless.  Well, at least selectively.

When I think about my 189 days, a few things come to mind.  Let's start with bare-knuckled emotions.

Did I mention Frustrating yet?

I'll note that in the bowels on this blog, years ago, I mentioned before that I am the world's worst unemployed person.  The past 189 days proved that to be true time and time again.  There were some bright spots over those days, including some important house projects getting completed (re-doing our front porch, installing an outside outlet, a ton of landscaping, re-organizing our garage, building some new storage, etc.).  Those were good, but they were not enough.  While I really enjoy working outdoors, it's best as a way for me to get my mind off of other things, not be the primary focus of my mind.  This is in keeping with my almost constant need for stimulation.

So why all the negativity, as noted above?

The job search process normally tends to be a terrible experience.  Add in millions of new folks looking for work and the inherent disruption of no close contact and you get something of a perfect storm of stink.  It was so bad that I honestly have no desire to go through it again.  Ever again.  Generalizations aside, there are a few very specific things that really make the process of finding a new job pretty terrible, such as when you seem to have a good rapport with a recruiter but then they basically go silent, without any explanation, and stop replying to your messages or returning your calls.  As someone working (again) in Human Resources, I view that as being something that's just not right, and to the extent I have any authority over recruiting, it will never happen under my watch.  Mind you, I don't think that every applicant needs to be acknowledged (the recent college graduate applying for that recently available CFO position, for example), but if someone meets the stated qualifications of a position, they deserve some kind of communication.

I'll digress even further here to relay an actual experience of mine that I consider to be just about the worst of the 189 days:

Regarding that last bullet, the answer was 3.5 hours.  The online assessments took three and a half hours of my time.  That, however, was not to be the punchline:
"Thanks.  We'll let you know if we want to proceed."

What that actually meant was that I spent 3.5 hours and I had no way of following up on the status of my application.  No recruiter to contact.  No company email.  Not even a rejection email.  Just radio silence if I wasn't selected.  That was (and is) both horrible and disrespectful.  Part of me wanted to somehow bill them for the time.  Nothing like asking someone to go above and beyond but yet not having the courtesy to at least tell them "no".  This particular company bills itself as being very selective in who they hire, which is all well and good, but I sincerely hope that they treat their existing employees far, far better than how they treat their employment candidates.

Another example from my 189 days is what I'll call "the sales pitch".  It works something like this:

The "sales pitch" inevitably had to do with either a sales position or a franchise opportunity.  Mind you there is nothing in my LinkedIn profile that actually gave any indication that I was interested in sales or franchise opportunities.  For the record, I have nothing against either career avenue.  What I do have a problem with is the insincerity on display to myself (and countless others) that was really nothing more than a lead-in gimmick.

In addition to the standard "sales pitch", I also experienced two variations:

These experiences were (and are for others on an on-going basis) disheartening.  If you are trying to recruit salespeople or sell a franchise opportunity, please be upfront about it.  Feigning concern as a lead-in to a pitch is just a terrible thing to do in times like this.

Hopefully, by now the picture of just how jarring this process has been for me has been painted.  As someone who values control, this was one of the most out of my control periods in my life.  What I could control was the process by which I looked for a job, and I did my best to be disciplined about the whole thing.  That attempt at a disciplined approach resulted in my making 72 different employment applications.  The breakdown by the source of the lead is as follows: 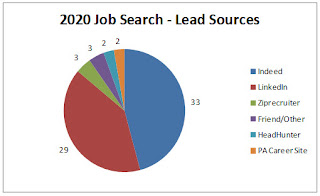 The sometimes brutal realities of a 2020 job search noted, there were plenty of positives to my 189 days, none the least of which is how my job search ended.  To really explain that, I need to go back to the year 1999.  It was in later 1999 when I decided that my career needed something of a change.  I was successful at what I was doing as a Customer Service Team manager, but the work itself just didn't seem to be all that important to me.  Working for a large company, I was able to find another role, in Human Resources, managing a Training and Development team.  Fast forward a few years from then and I basically decided that this (Human Resources) was going to be where I "hung my hat" for the rest of my professional life.  That kind of commitment sounds nice, but in reality, it was less a visionary statement and more a kind of messy battle plan that took years to bear any fruit.

This is the part where I am supposed to have the pithy statement about the power of perseverance, but I'm not going to do that, as there were many times when I wondered just what in the heck I was actually doing.  What looks like in hindsight a "well-orchestrated plan" was actually neither well-orchestrated nor much of a plan.  Instead, I just tried to string things together with what I had to work with, plus a lot of work.

Anyway, the messiness of the past duly noted, I've landed in a place where my imagination years ago though I should be.  Like most things in my life though, the path between the past and future wasn't exactly a straight line.  Maybe one day I will truly appreciate that fact.

My "not exactly a straight line" career progression couldn't have happened without people who supported me, in big ways and in small.  Every check-in and every word of encouragement meant more to me than I can adequately describe.  So too did every job lead, as regardless of whether or not it panned out it was still a vote of confidence in me.  My biggest cheerleader was my wife, Ms. Rivers, who also benefitted during my 189 days via the frequent runs to Dunkin Donuts for a small iced coffee with two cream and one Splenda as well as the twice a week lunch of (the famous but frozen) Victory Pig pizza.  I'll miss both myself by the way.

So now I've come to the end of this posting.  I am supposed to say, I think, that this is not an end but "is a beginning".  All well and good, but the reality is there always was "a beginning" in play anyway.  Maybe a smarter or more insightful person might seek some kind of deeper meaning in all of this; as for me, I'm just relieved.  And I'll leave it at that.

(*) For the truly (or mildly) curious, you can always check out my LinkedIn profile for more about the professional me.

Email ThisBlogThis!Share to TwitterShare to FacebookShare to Pinterest
Labels: Business, C-S, Me (Professional), Me. Deep Thoughts