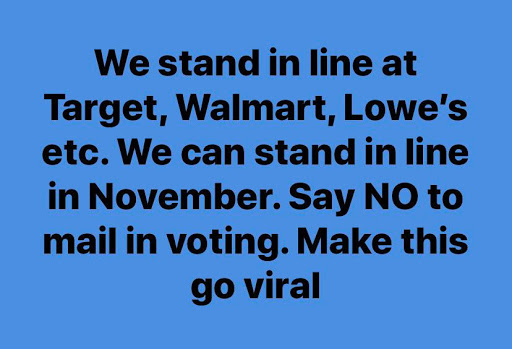 Personally, I think it's a great example of the kinds of things foreign agitators are doing in order to sow seeds of doubt in our political system.  The fact that the president has "mail-in vote fraud" as a standard talking point doesn't help either.
Personally, I think the very idea of comparing voting to shopping is a load of rubbish.  Here's why:
The final point is the most important one for me.  I am, generally speaking, a pretty healthy guy, all things considered, & high-milage noted.  However, I did develop asthma in my 40's.  Among other things, this means that on those rare occurrences when I do get a cold (for example...which occurs about once every 18 months or so), I get really sick.  Sick as in I end up having to take steroids for a few weeks.  Trust me when I say that two weeks of feeling greasy and bloated is not all that much fun, but it's better than hospitalization.  What's more, COVID-19 is no Cold, and I'm not about to throw months of being extraordinarily careful about hand-washing, mask-wearing, and avoiding crowds away just because of some Russian troll farm-produced and widely circulated a social media piece.
By all means, vote in person if you are moved to do so.  That's your right, and honestly what's most important here is that you simply do vote.  However, an entire state (Oregon) has been voting by mail for years now without any issues.  In fact, the president himself and, as I understand it, all of the senior members of his administration, have regularly voted by mail without issue.  A mail-in ballot goes through the exact same United States Postal Service channels whether it is an absentee ballot or a mail-in ballot.
The bottom line is this:  The arguments against voting by mail don't stand up when you think about it logically, which is precisely why these kinds of things are designed by Ivan and his comrades to elicit an emotional response.  I'm voting by mail in the November election because it's simply safer for me to do so and because it is proven to be a secure way for me to exercise my civil obligation.
Don't be so willing to take social media bait.
Think about these things logically, not emotionally.
What we should be passionate about here is encourage everyone we know to vote in November, be it in person or via the mail.
Created By Stephen Albert at 9:38 PM