Well, actually more like 8.
File this one under the category of "For no reason other than to just entertain me".
I'm convinced that, when you talk about the late Elvis Presley, it's simply not right to describe him in the singular.  In point of fact, I think there are actually 8 Elvises(1).  Allow me to explain.
Elvis #1:  Growing Up Elvis
This is the Elvis before there was an Elvis.  The blonde Elvis.  The Elvis with the burgeoning and almost un-natural attachment to his momma.  This the Elvis up until he made that initial recording at Sun Records (for, you guessed it, his momma).
Elvis #2:  Initial Fame Elvis
This is the "shaking his hips on national television and causing a commotion" Elvis.  The Elvis when most people think about Elvis.  The "Love me tender..." Elvis.  This is the epitome of all Elvis.
Elvis #3:  Army Elvis
This is Elvis when he joined the United States Army, stationed in Germany.  The Elvis who, while old enough to be in the Army, developed an almost un-natural attachment for a 14-year-old named Priscilla, who would later go on to be his wife " 'cilla".  This is the "your career is over" Elvis.
Yet, life could not keep an Elvis down.
Elvis #4:  Movie Elvis
This is the Elvis that made countless crappy movies, where Elvis always played a quasi-heroic outsider type who manages to save the day through elaborately staged 50's-era rock and roll songs.  Having seen a few Elvis movies myself, I defy anyone to binge-watch all of the Elvis movies and come out of the experience with most of their sanity in-tact.
Elvis #5:  '68 Comeback Special Elvis
This is the black leather-clad Elvis who, tired of repeating the same movie over and over again like some endless run of Home Improvement episodes, decided(2) to get back to his roots.
Want more '68 Comeback Special Elvis?  Click HERE.
Elvis#6:  Vegas Act Elvis (a.k.a. In The Ghetto Elvis)
This is the "okay, I am a singer again, so now what?" Elvis.  The Elvis who wasn't capable of being a contemporary of artists such as The Beatles.  The Elvis who apparently discovered plus-sized rhinestone jumpsuits and had a flair for belts only slightly smaller than your average World Wrestling Federation champtionship belt.  The Elvis who fancied himself a gun-tot'n real G-man and developed an unnatural affinity for, of all people, Richard Nixon. 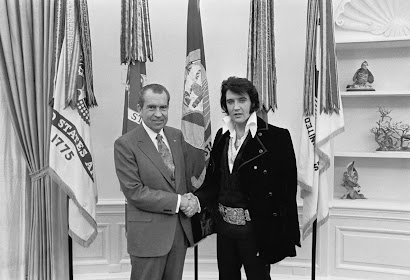 ("Nilvis" from Wikipedia)
This is also the "In the Ghetto" Elvis.  Seriously, listen to the song.  This song should be an auditory aid when teaching the concept of insincerity to junior high school students.
Elvis#7:  Dead on the Throne Elvis
This is the Elvis who died on the toilet at age 42.  The Elvis who technically suffered from cardiac arrest as a cause of death, but given the circumstances, including his insatiable appetite for certain drugs, it's not much of a stretch to come to the conclusion that Elvis actually died from chronic constipation(3).  That's a crappy way to die(4).
More on the death of Elvis, all be it a sanitized version, can be found HERE.
Elvis#8:  Revisionist History Elvis
This is the Elvis of Graceland.  The Elvis of countless impersonators.  The Elvis of legend and lore.  The Elvis that didn't have an unnatural affinity for his momma, didn't date a minor, didn't have Col. Tom Parker strong-arm songwriting credits away from actual song-wrinters(5) and wasn't the demanding customer of proto-Dr.Feelgood drug-dealer Doctor Nicky(6).
A final note of sorts:
I don't dislike Elvis.  I really don't.  I grew up listening to some of his music, and as noted above, I've seen far too many Elvis movies (a.k.a. Elvis#4) in my life.  I'll also note that, when you look at what this guy packed into a life of 42 years, well, it's nothing short of truly amazing.
However (and you knew there was a "however" coming), the notion of what Elvis represents does bother me.  This includes what's already been mentioned in this posting plus his cultural appropriation (and sanitization) of The Blues and the willful ignorance of those who admire him.  Yes, I know we are all flawed as human beings, but if you are going to stake your livelihood on being such a public person, you had better be prepared for the accompanying scrutiny.  When you look at the life of Elvis, well, it's actually not always such a pretty picture.
Thank You.
Thank You Very Much.
* * * * * *
(1) The correct plural of "Elvis" is "Elvises", not "Elvii, although I will note that "Elvii" would sound much better.  Citation HERE.
(2) When using a phrase like "Elvis decided..." it's important to remember that, outside of say dating a 14-year-old while an adult, Elvis didn't make a ton of actual decisions himself.  The man behind the curtain was his manager/svengali, "Colonel" Tom Parker.  More on "The Colonel" can be found HERE.
(3) Modern medicine is a great thing.  While many medications provide a tremendous service to us, some work, in part, by disrupting the connections between nerves and your brain.  A side effect though is that they also disrupt some of the nerve signals in your digestive system, resulting in, among other things, chronic and debilitating constipation.
(4) With apologies for the bad pun, but come on, this is a posting about Elvis Presley for Pete's sake. Potty humor is to be expected.  Sh*t, I did it again.
(5) Basicly, Elivs' manager would force songwriters to give Elvis partial songwriting credit in exchange for recording their music.  Citation HERE.
(6) Dr. Nicky refers to the real-life doctor George C. Nichopoulos, who effectively was the Official Elvis Dope-Dealer.  "DrFeelgood" refers to a terrific song by Motley Crue (see hyperlink).

Created By Stephen Albert at 10:17 AM