Update (of a sort) 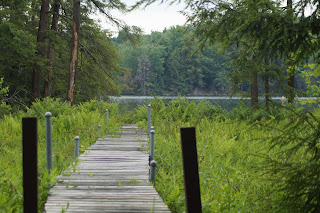 (on the road to somewhere)

I have been hard pressed to actually write anything over the past 2+ weeks.  It's not for lack of ideas, as I think of new things to write about all the time.  On the other side of the coin, I really only do this for myself, so it's not as if I have to write.  I could end the blog right now, as so many others have already done with their on-line writing (or even worse, just let it atrophy out of existence).  Like most things related to me though, the answers depend on the questions, and the questions can get mighty complicated.

An added obstacle to writing this posting is actually what I wrote on June 10th.  By most standards, that was a wildly successful posting, in that it got a ton of page views and was shared a number of times in social media.  This puts me in the mental trap of "well, I have to write something even better now".  Maybe now I've finally gotten myself back to the point of not really caring all that much about how many times anything I write is actually viewed.

Anyway, I'm back.  At least for now.  That noted, here are a few things pinging around in my head these days:

Politics - The current president is simply an amplification of everything that's wrong with our nation.  He is the ultimate "ugly American".  There isn't a day that goes by when his very own words (usually via Twitter) don't disgust me.  For someone who claims mighty injustice over how he is covered by the media, he fails to realize that it's his own words that harm him the most.  As the election gets closer I'll have more to say on this topic.  In the end, the November election won't be about a particular man, but instead it will be about who we are, as a people, at our very core.

COVID-19 - Nothing screams the very worst of Americans than those who loudly complain about having to wear a face mask in public.  Nowhere is this more on display than at your local WalMart.  As someone with a chronic breathing problem...I have asthma (which I developed in my mid-40's)...I am disgusted by the claims of some that they shouldn't have to wear a mask because of a health condition.  Look, if someone genuinely can't go out side wearing a mask then I think they have two choices:
The ugly American choice of "well I have the freedom to put others at risk" isn't on the table.  Also, I've seen graphics and read commentary on-line mocking the wearing of masks because doing so "is like trying to stop mosquitos with a chain-link fence".  Another example of American ignorance at its very worst.  For the record, the virus particles expelled by someone are attached to vapor droplets as we exhale/sneeze/cough.  Masks can definitely help stop the spread of those vapor droplets (and by extension the viruses that they contain).  Bottom line?  If you go outside WEAR A DAMN MASK!

At Home - As I work through the mechanics of finding new employment, I'm left with countless projects to complete around the house.  I've already completed quite a few things, including a section of landscaping and working on our front porch.  The easy thing to say is "well you have this time off, so you should be relaxing"...but that's just not me.  I need a lot of mental stimulation, which makes times like this somewhat challenging.  Along with this comes uncertainty, as in when my next professional opportunity will come to light.  I don't especially like uncertainty.  In any event, all stories have endings, including the story of my COVID-19 job search.  Hopefully I am now in the later chapters.

Music - I've listened the Genesis song The Lamb Lies Down on Broadway literally dozens of times over the past few weeks.  It's a kind of hidden treasure of listening.  At first listen your impression might be "yeah, that's okay...the keyboard part is pretty neat...but I don't understand the lyrics".  Listen to it a few times, with really good headphones, and you'll hear...

...the seeming time signature change at the very beginning of the song
...an early version Phil Collins' big drum sound
...how Peter Gabriel seamlessly goes from signing to screaming (and back)
...the very descriptive (of New York City) lyrics
...the fact that it's the bass guitar that's really driving the song


To the final point, Mike Rutherford used a microfret 6 string fuzz bass (more details HERE) on the song.  The bass guitar is simply incredible on this song.  Anyway, enjoy...

Created By Stephen Albert at 11:03 AM