The Civil War, Slavery & a Rag 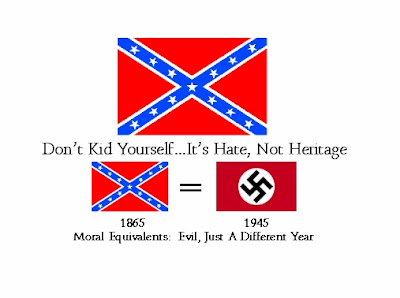 (graphic by me, from an original posting about 10 years ago)


Submitted for the common good, if you go to this link...

...you will find the text of The Declaration of Causes of Seceding States, which is basically a kind of "declaration of independence" for 5 of the southern states that left the Union before the Civil War.  Now I've written posts in the past about my disdain for the filthy rag, also known as the Confederate battle flag, and one of the common retorts I've gotten is that the Civil War was not about slavery, but instead it was really about __________________ (pick'm...economics, states rights, etc.) and the flag is a part of southern heritage.  This document though is a great example of just how flawed that logic actually is in practice.

38 is the number of times that "slavery" is mentioned in the above document.

To quote the section authored by leaders of the state of Mississippi:
"Our position is thoroughly identified with the institution of slavery-- the greatest material interest of the world."

"It has grown until it denies the right of property in slaves, and refuses protection to that right on the high seas, in the Territories, and wherever the government of the United States had jurisdiction."
("It" is the Federal Union)

And South Carolina:
"The right of property in slaves was recognized by giving to free persons distinct political rights..."

And Texas:
"She was received as a commonwealth holding, maintaining and protecting the institution known as negro slavery-- the servitude of the African to the white race within her limits-- a relation that had existed from the first settlement of her wilderness by the white race, and which her people intended should exist in all future time."
("She" is Texas)

As an added bonus, you can find the original text of Florida's reasons for seceding HERE.  The term "slave" or "slavery" is mentioned 14 times in the 1388 word document.  From the document:
"Their natural tendency every where shown where the race has existed to idleness vagrancy and crime increased by an inability to procure subsistence. Can any thing be more impudently false than the pretense that this state of things is to be brought about from considerations of humanity to the slaves."
("Their" references slaves themselves)

So yes, the Civil War was about southern rights and economics, most especially the "right" to own other human beings for economic purposes, as noted by Texas "in all future time".


I know people who believe that there is nothing wrong with the Confederate battle flag.  I want to believe that these folks sincerely just don't realize how horrible a symbol that flag is, so I'm hoping that they take some time to ask themselves if they truly support what this flag stood for...including racism, the grave sin of slavery, and treason.  It's not a secret or a coincidence that racist organizations continue to fly this repugnant piece of fabric trash. 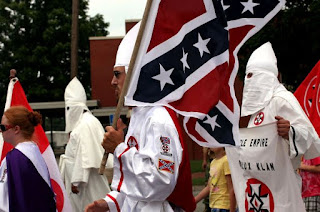 By the way, some change is finally coming with regard to this symbol of slavery (see HERE).

To the Deniers:
It's your prerogative, I suppose, to disagree with this posting.  There was a point in my life when I believed in some of this nonsense as well.  I got over it though...growing up and experiencing a bit of the world will help do that...and I hope that one day you do too.  Ask yourself why you still support this racist symbol:  Is it out of pride at not wanting to admit you are wrong?  Is it out of some sense of rebellion, a kind of "sticking it to the man", that you must resist what others tell you (even when what they tell you is that slavery and racism are evil)?  At this stage it certainly can't be about your ignorance of history and the facts surrounding the flag.  In the end, life is too short for the intellectual tap dancing (or flat-out denial) required to defend this putrid symbol of systemic evil.

Created By Stephen Albert at 8:43 AM