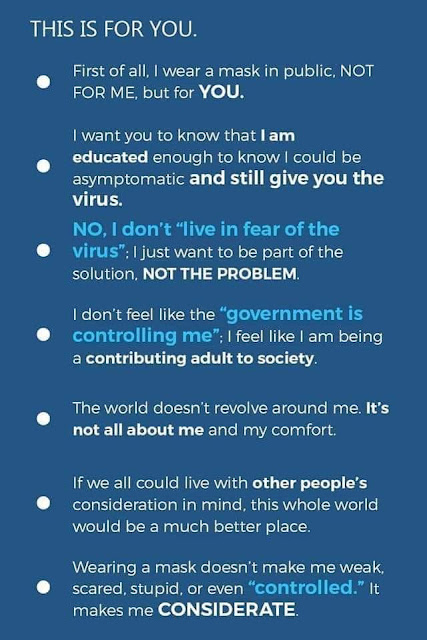 (The above is not open to debate, at least with me)

I don't see ditching the mask any time soon.  In fact, I just ordered something to use while hiking/outdoor work.  Yes, I get that they are a pain in the rear-end.  Do you want to know what would be a bigger pain in the rear-end?  The knowledge that I may have inadvertently contributed to someone else getting sick.  It's the kind of small sacrifice thing that Americans used to be really good at, a long time ago, before the "Greed is Good" era came about.

I love having a bird feeder, and surprisingly, I love having squirrels around as well.  Granted that I've already noted the cold war that exists between myself and the squirrels relative to the bird feeder.  The last escalation when the squirrels deployed swing technology to empty the feeder.  What, may you ask, is "swing technology"?  Well, since they can not get to the feeder directly, they figured out that they can get on top of the feeder and swing it enough such that seed spills onto the ground.  They did this so much that the feeder contents completely emptied in about two days (normally the feeder, sans squirrel tech, lasts about a week).  I'm still pondering my response to swing tech.

As a side note, I still feed the squirrels peanuts every morning. They do need a balanced diet after all, and peanuts are high in protein.  Besides, there is nothing quite as adorable as a squirrel picking up a shelled peanut in its little hands.  For the most part, what they do is pick the shelled peanut up, inspect it for a moment, put it in their little squirrel mouth, and then frolic away somewhere to eat the peanut in peace.

Why am I even mentioning this?

I guess I see something of a larger lesson in squirrels.  Like people, they can be a pain in the rear-end, but yet what they do (unlike people, at least sometimes) isn't malicious.  Squirrels raid bird-feeders...that's what they do.  It's in their nature.  In fact, something would be wrong if they weren't continuously trying to raid the bird-feeder.  They don't take the birdseed because they simply want to acquire and horde lots of stuff...unlike people...they do it because they need the food.  There are times when I have a lot more sympathy for the squirrels in my backyard than I do some of the people I read about in the news.  Greed is not, in fact, good.

Created By Stephen Albert at 5:23 PM