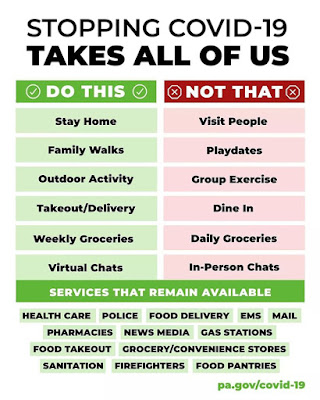 Effective yesterday (Friday, March 27th), the governor of Pennsylvania issued a "Stay At Home" order for Lackawanna and Luzerne counties.  Details can be found HERE.  From a practical standpoint, it really doesn't change much for me or Ms. Rivers, as we were pretty much just staying home anyway.  The hope is though that more folks will be more cautious in the days and weeks to come.

I get, by the way, how difficult this is for many.  Heck, I don't like to socialize, but even I am starting to get some cabin fever.  The reality though is that the alternative is worse.

In terms of where Pennsylvania is at this point (7:15pm on Saturday, March 28th), there have been 28,005 residents tested for Covid-19, of which 25,254 have had negative results (90.2%) and 2,751 (or 9.8%) have had a positive result.  There have been 34 fatalities attributed to Covid-19, make the death rate 1.2%.  Current numbers can be found HERE.  I mention this not out of some morbid curiosity, but rather to (at least for me) put this in perspective:  While this is terrible...and we need to do everything possible to end this as soon as possible...the infection rate is still relatively low.  Assuming that the total number of cases (28,005) is dramatically understated and that the real number is actually triple that (84,015), the infection rate in the general population would stand at 0.6%*.  AGAIN, my point isn't that "this is a very low number, therefore we don't have to worry about it"...instead, it's "this is a low number, so if we act now, we can potentially save a lot of lives".

The above noted, any life lost to this is a tragedy.  For example, I learned last night that one of the people who hired me at Prudential in 1988, and who was my first Director, recently passed away as a result of the pandemic.  Augie (August) A. Urgola, was one of a kind individual.  I could spend the next 5,000 words telling "Augie Stories", but I'll just list two:
I could tell a few more (including a time when Augie and I were in Kansas City, MO or the time a bunch of us got Augie talking about the JFK assassination), but I'm just one voice in a chorus of people who have countless Augie stories.  Anyway, may Augie Rest in Peace.  You can read Augie's obituary HERE.

Sadly, there will be more Augie-like stories to come.  This is all the more reason we need to take steps now to prevent even more tragedies.  This, all of this, matters.

On that note, I am a bit drained.

Oh, and before I forget, let's be careful out there.

(**) I went into my former office yesterday morning to pack my stuff and bring it home.  As I was packing, that very same Augie story came to mind.  A day and a half later, I find myself thinking that, while in the past CEOs were lauded for making tough decisions...including to "rightsize" their organizations...maybe now we'll save the lauding for CEOs that do the opposite...that find a way to keep people employed through these difficult times.  Augie would approve.

Created By Stephen Albert at 8:06 PM