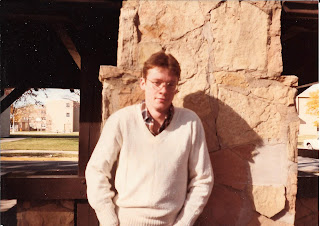 I found my brother Chris dead in his home on January 5, 2017.  We aren’t actually sure exactly when he passed away.  The circumstances of his passing are actually pretty terrible; in the past, I’ve noted that I was glad in a sense to have found him, as that spared others (such as my other brothers) from having to go through the trauma.  These days, well, I would no longer use the word “glad”, but perhaps instead I am relieved that others were spared the experience.  I will confess though that it's taken something of a toll on me over the intervening years.

Before I go on, my intent on writing this posting is to tell a funny story or two about Chris, but I’m not sure it will go in that direction.  I know that’s lifting the writing curtain up a bit, something that doesn’t necessarily make for good reading, but I’m going to do it anyway.  Maybe I need to give myself outward permission to take this wherever it goes.  Anyway, permission is officially granted.

When Chris met Chris.  When my brother Chris met my (future wife) Chris(tine), the very first words out of his mouth was a joke involving midgets and pornography.  With apologies for using the word “midget”, but that’s the word he actually used.  That was, by the way, the way he rolled.  Chris (the brother) loved to get a reaction out of people.  Now I did warn my future wife Chris(tine) about my brother Chris, but I don’t think the warning did him justice.  Very few things did my brother Chris justice.  It was in part homage to that first encounter that I ended up getting Chris this tee shirt for Christmas one year: 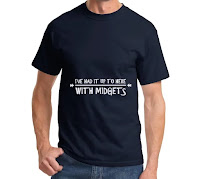 (Available from THIS fine site)

Chris loved the shirt though, and over the years I took great delight in finding other absurd shirts to get him, including one that proclaimed that PETA actually stood for “People Eating Tasty Animals”. 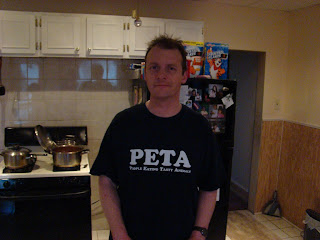 Of pumpkins and Limbaugh.  Chris absolutely loved Rush Limbaugh.  Not that he actually believed most of the nonsense that Limbaugh spewed (he said yes, but I knew better) but for Chris, it was mostly, I think, about rebellion.  That would be a rebellion against our mother, who could easily be thrown into a rage at the mere thought of talk radio, let alone “El Rushbo”.  While most folks stop rebelling against their parents at about age 19, Chris carried it forward until the day mom died.  She ended up getting the last word in their on-going war though, as Chris lost his seemingly perpetual reason for rebellion.  I’m convinced that this bothered Chris on some very deep level.  Anyway, at one point after a heated argument with me about talk radio’s Most Famous Pill Addict, Chris actually left in disgust, claiming that I was just going to keep calling him (Limbaugh) “Pumpkin Head” anyway.  In all fairness, Limbaugh’s head does kind of look like a pumpkin.  For the record, that was probably the only time in my life when I could claim any kind of real verbal victory against Chris.

A third story, and not necessarily a funny one.  Chris was secretly one of my biggest cheerleaders.  That’s an odd comment to make for those that knew Chris, but the two times in my life when I was at my lowest (well outside of finding my brother…) Chris made sure I knew of his confidence in me.  He knew I would get through my difficult divorce (and all divorces are difficult) and he was absolutely positive I would land on my feet when my nearly 28-year former career came to an end.  There was never any doubt in Chris’ mind either time, even though there was plenty of doubt in mine.  I wish I would have told him how much his confidence during those two difficult times meant to me.  That’s a common denominator or sorts about losing someone close to you:  You get to think about all the unsaid things.

Speaking of confidence, well, that was an important part of Chris’ bag of tricks.  My genetic testing kit tells me that I am far more Irish than I want to actually believe (no offense to the Irish…I was hoping for more German), but if anyone in our family had the Irish “gift of gab” it was Chris.  He was engaging, smart, and confident.  Now I can play “engaging and confident” when I’m being paid to do so, but for Chris, well, it was the real thing.  My confidence was learned; Chris had it in his genetic code.  Even towards the end of 2016, a very difficult year from my brother, he could still manage to talk me into things.  Yeah, part of that was his skill, but part of it was the fact that I would have done anything to rescue my brother, as would have the others close to him.  For the record, I failed.  Kindly spare me the “it’s not your fault Steve” stuff, as I logically understand I am not to blame, but logic was in short supply when it came to Chris’ passing.

I think it was this confidence that, in part, made Chris clash so much with our mother.  What I saw as confidence she saw as arrogance, and she had little place in her world for arrogant men, with emphasis on the word “men”.  Maybe on some level, she felt that was intimidating.  I personally think that they were actually a lot more alike than dissimilar.  Maybe that’s why my brother didn’t spend much time with our mother.  While on vacation, as a general rule, I couldn’t count on Chris to check in on our mother; he wouldn’t do it or mom would flat out refuse to do anything with him.  All of this was quite a feat given the fact that, for a number of years, they lived across the street from each other.  In retrospect, their clashes were, I think, a function of both looking into a mirror and seeing things neither was especially keen to gaze upon.  Our mom saw in Chris some of her earlier life flaws; Chris saw in mom so much anger…anger that he held as well, but which he would completely deny up until the end, in spite of my encouragements to the contrary.

Gazing is a good place to end this posting.  When I found Chris, well, I didn’t get a horribly good look at him.  The bedroom where I found him was dark (his house had no electrical power at the time), something for which I have some gratitude.  That visual simply would not have been all that pleasant, given the details of his passing.  I did touch him though, in a one-time attempt to see if he was sleeping.  He wasn’t sleeping and I will never, ever, get that touch out of my mind.  Saying “mind” isn’t an adequate description here, as it’s more of a physical memory that I have of that final encounter with Chris.  I can still “feel” it.  I would have given anything for a chance to say goodbye, but ever the rebel, Chris wasn’t going to allow that to happen.  As I noted in his eulogy, my hope is that he is now in a better place with our mother, rebellion full exercised.

Until we meet again brother.
Created By Stephen Albert at 8:27 PM