I've been reading about the whole Marie Kondo thing lately, and while having absolutely no intention of reading Ms. Kondo's book or following any of her advice, I think we can all appreciate the fine art of the cleanup.  To take a bit of a sidetrack for a moment, I don't think Ms. Kondo is really selling organizational skills; instead, she's selling the perception of self-control.  That's something most of us want, but yet not everyone can actually (mentally) afford to any degree of consistency.

As for me, well I enjoy the act of organization.  In fact, my latest quest has been to re-do our home office.  To take a step back, when I was living in my own apartment, I bought some office furniture from IKEA that was well suited for the task and space.  When we bought our current home though in 2013, well, my office furniture wasn't quite a good fit for the home office space we had available.  Think about 3 sizes too big.  While I knew I'd eventually have to make some kind of change, I also had a few other things ahead in the life-queue department.  Fortunately, I have a wife that's relatively tolerant of my need to create a personal retreat space.

Since 2013 I had made a few improvements to the office space, including adding bookshelves on the exterior facing wall.  I have a lot of books.  And other stuff.  Anyway, I'd tell you that the shelves were a part of a larger, strategic space plan, but that would be a lie.  I just wanted lots of shelves.  I still had a desk that was still 3 sizes too big.

Master degree completed, and other excuses eliminated, so it was time to turn our home office into something that isn't a hazard to both humans and cats in while in the dark.  That work is (mostly) completed, with a bulky IKEA office thingie replaced by two bamboo surface, adjustable height tables (one for me, one for Ms. Rivers), along with a few other improvements that probably only I, and our cats actually care about.  To be honest, though, the cats don't care about it either. 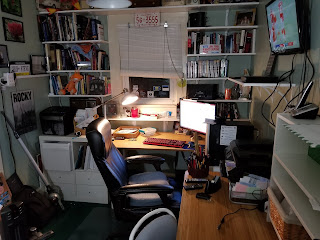 Again, the above details don't mean much to anyone but me, and that's okay.  There is a bigger point in all of this though, and I'm not selling "organization is important but it's really about control" either.  I think that activities like cleanup and re-organization are actually about a need for change.  It's about always being in a place where at least I can say "this can be better".  That's a place that ultimately tells me that, in spite of a few bumps in my road over the past two years, everything is still okay.

Created By Stephen Albert at 9:00 PM

Email ThisBlogThis!Share to TwitterShare to FacebookShare to Pinterest
Labels: Me, Me. Deep Thoughts