On the road in Lancaster, Pennsylvania.

Ms. Rivers and I usually go away for a weekend in the Fall.  Nowhere fancy mind you...the basic rules are that it's for a weekend and it has to be within driving distance.  The allure of air travel has long expired for both of us, and there are simply too many other things going on, making anything longer than a weekend impractical at best.  That latter point is one of the many things Ms. Rivers and I have in common:  Am almost ceaseless list of things we want to accomplish.

This weekend's trip was decided in theory a few months ago and decided in practice last Monday.  That's how this stuff rolls sometimes.  We choose Lancaster because, well, because it's Lancaster.  I've also only been to Lancaster once before.  That trip was in 1987, and I drove with my fellow Maxwell's buyers to get a train to New York City in Lancaster.  Suffice to say, I didn't see all that much.  For the record, at the time I lived in York, which is something of a slightly smaller sister city to Lancaster, but without some of the charm the Red Rose City enjoys.

I really needed this trip.  Really and truly.  This should be one of the best times of my life, yet I've been fairly unsettled for a while now.  In life perspective is everything, so what better way to gain perspective than a temporary change in scenery?  While Lancaster has had its share of problems over the years, beautiful scenery isn't among its challenges.  This is a beautiful place, and the thought of living somewhere that afforded the ability to walk to a farmer's market for fresh food is alluring.  Ms. Rivers and I have spent more than a few minutes over the past months and years thinking about where we'd like to live our retirement years.  Decisions are still pending.

We spent late morning and most of the afternoon on Saturday wandering about downtown Lancaster.  The city has a wonderful farmer's market and tons of small shops that remind you of Philadelphia, all be it on a smaller scale.  One such place we stopped was Art & Glassworks. 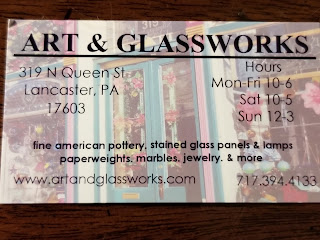 Walking into the shop, the first thing Ms. Rivers noticed was all of the beautiful glass the shop had on display.  The first thing I noticed?  That would be Nicky.  You see, Nicky is a 19-year-old male cat that keeps watch over the shop.  Nicky and I spent about 5 minutes getting acquainted as Ms. Rivers attended to more serious shopping business.  Any business that has a cat is worth patronizing in my book, so if you are ever in Lancaster (either at their stand in the Farmer's Market or at their store) please visit Art & Glassworks.  And pet Nicky for me.  He's a good cat.  I'll also note that, in addition to petting a cat, we did get some shopping done, so it was a win for both Nicky and the shop owner.

Jesus was not live on stage. 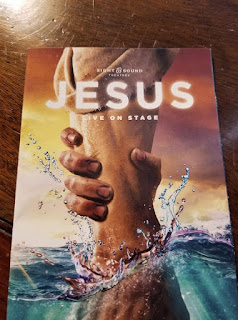 We picked this pamphlet up at the hotel(*), and I thought it was almost bizarrely funny.  Now I know from a Facebook posting that others have actually seen this show and enjoyed it.  However, I just think it's a bit odd to claim that Jesus is "live, on stage".  If, in fact, Jesus was live, I would hope that it wouldn't be on a sage in Lancaster County, Pennsylvania.  There's a lot of bad stuff happening in this country at the moment, and if there is such a thing as divine intervention, well, we could use a little bit of it right here and now.  We are truly an un-tended flock at the moment.

On the slow road back home, we stopped at a mall in Lancaster, and low and behold there was a functional Sears. 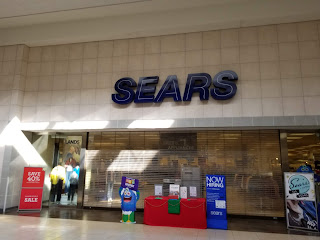 I'm not sure how many of these are actually left but suffice to say the answer is somewhere between "few" and "not many".  As a sign of just how dismal the whole situation is, we could have waited about 14 minutes for the store to open, but we thought "Meh, why bother?".  That pretty much sums up Sears.

The final stop on the drive home was the National Civil War Museum in Harrisburg.  The stop itself was figured out this morning, mostly based on the intricate science of "well, why not?".  Nice place. 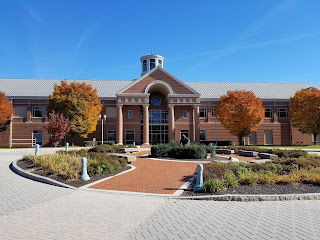 Walking through the museum I was reminded of what this country has been through, and likely what it still has to go through.  In spite of a bloody war and over a hundred years of time passages, some of those old wounds have yet to heal.  Let's hope it doesn't take another war for us to find our "better angels".

(*) We stayed at the Cork Factory Hotel on New Holland Avenue in Lancaster.  Overall it was a nice place, but apparently, it does a very robust wedding business.  That's good for the hotel, but not necessarily good for the other guests who can't find parking or a table for dinner.  Speaking of dinner, we needed reservations to eat at the hotel's restaurant.  Now I've stayed at some fancy hotels over 30 or so years, but I can't recall a lone hotel restaurant that required reservations.  If you want to get married in Lancaster you should check the hotel out.  If you just want a weekend getaway?  Well, better not make that in June.


Created By Stephen Albert at 9:08 PM