Zen and the Art of Bush Removal

When Ms. Rivers and I purchased our current home, along with four bedrooms and one and a half (soon to be two and a half) bathrooms we also got about 60 or so feet of hedges.  Now I thoroughly enjoy yard work, so I thought nothing of keeping the row of edges neatly chopped.  As the years worn on though, bush removal became a thing.

First, there were the rather straggly looking bushes by our Maple tree, toward the back of the property.  The more I looked at them, the more it became apparent they did nothing for anyone.  So off they went.  In that particular case, "off" meant cutting them off to about a foot off the ground then using a pickaxe (technically, I used a Mattock) to dig the roots out.  Sweaty, buggy and incredibly dirty describes the basic process.  I took me about three weeks to take out about 20 feet of disjointed shrubbery.

After that, we basically left a fairly healthy section of hedges intact.

Then came the realization that having about 40 feet of hedges that were against a 6-foot high privacy fence (belonging to the neighbors) just looked rather stupid.  What to do?  Two words:  Truck + Chains.

Most of the 40 feet of remaining hedge were pulled out by me using a long chain connected to the hitch of my Chevy Silverado.  It's an interesting process to watch.  While it's also a fairly dirty affair, it requires far less effort than slamming away on deep roots using a Mattock.  I'll also cop to the fact that it's, well, kind of fun pulling things out using the truck.  That's the 2.3% of my genetic make-up that "23 and Me" says hails from a not so far off land called "Redneck".

A portion, by the way, of the hedges could not be pulled out via Silverado due to other things being in the way.  That will need to be dug up the old-fashioned way, using grime and determination.  I'm not looking forward to it.

Replacing the hedges will be a series of perennial flowering plants, about 2/3rds of which have yet to be purchased.

I know, most of what's written above is, well, kind of stupid.  Maybe mildly amusing (the "Redneck" part) at best.  But in an odd sort of way, it's a good backhanded way to describing myself.  I always have to be tinkering with something.  I always need some kind of project in my life, the accomplishment of which is almost always far less interesting than the effort.  It's as if I just can't actually seem to take a weekend and do nothing.  If I did, well, I suspect I'd end up feeling guilty or some similar thought.

Maybe one day my body will simply give out on me, forcing a rest.  I already know I don't have the stamina I once had, even five years ago.  Then I have arthritis in my feet to contend with.  Oh, and let's not forget the fact that flying bugs seem to love me more than my wife and children combined.  Hence, by the way, the newly purchased bug hat... 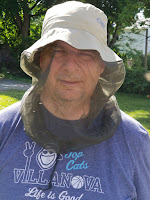 ...which is a great concept, but flawed in the sense that it basically turns your head into a slightly ventilated sweat-steam sauna.  Emphasis on "slightly".  But it does keep the bugs away.

On a final note, I keep thinking that I should write more about politics, after all, someone needs to (since Gort doesn't write much and Andy Palumbo prefers posts about Marywood and Cats).  However, every time I think about it I simply get disgusted.  The President doesn't have supporters...at this stage he has believers...and that's more sad than interesting.  Try arguing religion with a Mormon missionary and you'll know what I mean.  On a local level, there are just so many times you can write about the incompetence and the Scranton School District, and Scranton Mayor Courtright actually seems to be doing a decent job (Tom Borthwick paid me $5 to write that...just kidding...).  Maybe the fun will come back one day...when my feet really give out on me and I don't have anything else to do.


Created By Stephen Albert at 8:25 PM