A Week of Degrees 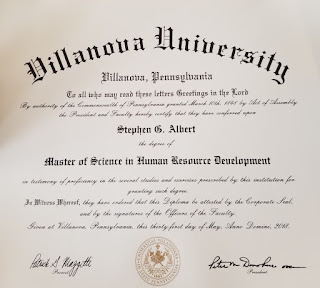 It was what I would call a bad week.  Simply bad.  There was bad news...two suicides of public folks who seemingly had everything going for them.  There were bad body parts...in my case a left foot that impeded my ability to walk for much of the week.  There are stressful times at work.  This was one of those weeks where you look back and wonder just how you were able to somehow get by.

I confess to spending more time than I will actually account reading about the late designer Kate Spade.  As noted in another posting (HERE), I had not actually heard of her until this week.  My ability to intellectualize just about anything happening in the world was thrown asunder by the notion that this smart, incredibly successful...both financially and personally...and attractive person would end her life.  It just doesn't make sense, and that bothers me on some deep level.

For the record, I fully understand that mental health issues, in general, don't play well in a purely rational-thought driven world.  Like most feelings, well, they are best simply felt, not intellectually disassembled and analyzed like oh so many parts to a machine.  However, I am personally terrible at the former and pretty good at the later.  Feelings are hard.

By the time the news of Anthony Bourdain's suicide came to light, my ability to try and intellectually understand the intellectually un-understandable had been overloaded.  Too many feelings to understand, too many horrible past memories being dredged up.  It was just too much.

As noted above, I was also facing some physical challenges.  Thanks to a terrific family doctor, the problem with my foot was diagnosed as being an arthritis flair-up.  I had known about having arthritis in my right foot (big toe bones, to be precise), but the left foot was a new one.  The whole thing is a part of the price some of us pay for managing to get this old.  In any event, the foot is actually feeling better.

Adding to the mix is a series of challenges at work.  As I am learning, the notion of control is important to me.  I am at my best when I feel as if I have things under control.  I am at my worst when I feel the opposite.  One of the reasons why I struggle with delegation is because I don't feel comfortable relinquishing control over something.  That's not about the competence of the people I work with (all of whom are extraordinarily competent, for the record); no, that's about how I was raised and the notion that so much of that time in my life left out of control.  Anyway, at work right now there is a lot going on and I simply can't control everything.  It's not humanly possible.  Those two seemingly in conflict things drive my personal anxiety levels to the point where it's no wonder...maybe...that something like arthritis decides to make its presence known.

The seemingly final exclamation mark to my week happened Saturday morning when I had to assist my youngest brother.  He's a wonderful person, but like so many, technologically challenged.  After this past week, I had about...

...patience left.  Technical issues were solved, but it felt as if I had gotten hit by a club.  Again.

Then I came home, and a tube from Villanova Universtiy was waiting by our mailbox.  It was as if somehow I was being reminded that, even in the midst of dark chaos, sometimes good things happen

I had opted out of actually participating in the commencement activities at Villanova.  Despite the urgings of my wife and youngest daughter, I just didn't want to go through all the ceremony, etc.  More than anything else, I was just glad that school was over with and I could spend more time doing the things I enjoy.  "Studying HR stuff" is not one of the things I enjoy.  At age 54, I think I've earned the right to be less encumbered.

I will note that, after actually receiving my degree, I am left wondering "why" and "what's next".  I didn't start my graduate degree with the notion that it would directly benefit that which I laughingly call my career.  No, I think it was more about trying to prove to myself that I was smart enough to do it.  Yes, I do have doubts in that regard from time to time.  Now I have a piece of paper, waiting to be framed, that says those doubt might be wrong.  Sometimes.

Speaking of my piece of paper, I've managed to convince my wife that we should get both of our Master's degrees framed.  Her degree was successfully salvaged from another location last year in a clandestine operation that could be described as "Mission Impossible meets Hoarders".  My wife, being the truly smart person she is, earned her MBA from Wilkes University shortly after earning her Bachelor's degree.  Now I just have to drag her to the framing store and find a place to hang these wonderful documents.

Call it God or call it karma or call it random change.  Whatever it is, sometimes life as a knack for reminding us to keep things in perspective.

Created By Stephen Albert at 10:04 AM