There's a thin line between naive and empathetic...

...in fact, sometimes the line is so thin that I can't even tell that it's there.

Sometimes I'm just slow on the uptick when it comes to certain things.  It's my natural place to give people the benefit of the doubt.  All people.  I don't know where this particular trait came from, as it wasn't parental in nature.  I do know that it's there, all of the time.  In fact, after a particularly rough day at work a week or so ago, one of the conclusions I came to is that if I did have a super-power, it would be empathy.

Sometimes these things do gnaw on me though.  Like most folks, for example, I have an instinctive need to be liked, despite what I may claim some most of the time.  Some emotions are particularly difficult for me to process, most especially anger.  I've written about that before.  There have been times over the past few months where I've been very angry, and it didn't feel good.  Now good did come of it though, especially the fact that, while I am still baffled at certain situations, the initial anger has not festered inside of me like a bad chimichanga.

Sometimes I do learn.  See above.  It's nice to spout stuff about the corrosive effect that ego has on the human condition, but it's even nicer when you put it into action.  In my case that has been realizing that holding onto anger, even when it may very well be deserved, speaks more about my need for gratification than any kind of functionally useful end product for my greater life.  Granted that I've never been an angry kind of guy, but that's more so of the daily variety.  The better test is when you get hit with the neutron bomb kind of situation, you know the one specifically designed to do mostly internal damage; that's when you know just what you're made of.

This all sounds so nebulous, so preachy, so new-age-ish, so not me being the practical one-time engineer/scientist wannabe.  Yet, it's really not.  These kinds of things, you know, the ability to actually ponder that which seeks to poison us, seem as practical a skill-set as anything.  There are also incredibly difficult to put into practice, at least sometimes.  As I said, the anger-management stuff comes easy for me, but that comes at the price of always having myself open to a perpetual notion that "well maybe they are right".  While empathy is my super-power, it is also my Achilles Heel.

What to do?  Nothing.  While another super-power I possess (well, actually I only think I have two anyway) is the ability to learn, some things I am not going to learn, ever.  It may be naive to be in an almost perpetually in a state of empathy, but I'll take it over the alternative.  Yes, I'll take "kind" over "tough" any day.  Anyone can pretend to be tough, but pretending to be kind?  That never, ever works out very well. 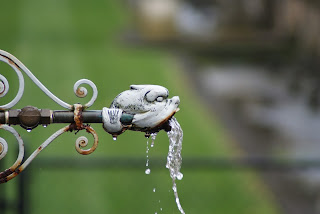