Eye Freckle...In the "news of the weird" department, my annual trip to the eye doctor's office yielded the fact that I apparently have what is commonly (well for something relatively uncommon) known as an "eye freckle".  The technical name is a "choroidal nevus".  I knew something was up when, during the "shine a bright light into your eye" phase of the exam I kept seeing this purple pill-ish looking thing floating in front of my left eye.  Apparently it's nothing to worry about, provided that it doesn't turn into eyeball cancer on me.  My wife warned me that, if horribly this does turn into eyeball cancer, I eventually have to get a glass replacement eye.  I would have gone strictly for the patch.  Kicking it Moshe Dayan style.

On a related note, I really dislike wearing sunglasses.  I find them to be annoying and uncomfortable.  Yet, given the eye freckle, I really do need to engage in some better eye care, especially from the sun.  To that end, I actually broke down and bought a good pair of sunglasses.  Now to see if I actually wear them.

Speaking of the Eye Doctor...I am supposed to go every year, which I do mind you, but the timing is somewhat variable.  This year the impetus was the fact that I stopped wearing my glasses, left them in my truck for a week or so when it was 90+ degrees outside (and hotter inside the truck) and effectively baked the lenses.  The odd thing is that I can go without wearing them as much as I like; I do see better with glasses, especially at night, but I can muddle by without  them.  Anyway, new glasses have been ordered, and this time I have to remember not to bake them in the truck.

Donald Trump...by some accounts, is polling at 1% in the African American community.  That may sound bad, but I can make it worse:  Mitt Romney, quite possibly the whitest American alive, got something like 5% of the African American vote in 2012 (source HERE).  Let that sink in for a moment.

Hillary Clinton...I was talking to a colleague about Hillary Clinton's speaking style the other day.  Now I think I am a fairly good public speaker.  Certainly not up to Presidential standards, but pretty good.  By virtue of that, I feel like I can offer constructive feedback when I hear others speaking.  All of that is window dressing for the following:  Why in the Heck does Hillary Clinton basically engage in monotone yelling when she speaks at rallies, etc?  It's like fingernails across a chalk board.  I know that Ms Clinton can speak well; if you doubt me, just what her hours long performance in front of Congress a few months ago.  Simply brilliant.  On the stump?  Not so much.

A-Fib and Energy Drinks...I came across this a week or so ago:  Energy Drinks & Heart Problems.  The more I read about this stuff, the more convinced I am that my sudden heart issues earlier this year were mostly the result of poor sleep and the consumption of energy drinks (you know, because I didn't sleep so well).  Needless to say, I don't touch the stuff now, although I do worry about generations of younger folks who are growing up drinking Red Bull and Monster drinks.

Kathleen Kane...is now a convicted felon and former Pennsylvania Attorney General.  I'm not the most connected person in the world, especially when it comes to politics, but I did get the impression very early on in Ms Kane's initial campaign for AG that she's difficult to work with; to that you can also add "vindictive" as well.  This is the part where I'm supposed to say "...she came so far, how could she have fallen so fast?" or something like that, but I won't.  Instead I'll simply note that former AG Kane is a great example of just how toxic of a force ego can be in our lives.  Maybe she'll have some time to check out Eckhart Tolle while she's in prison.

Religion and Class...I found this on the intra-webs the other week.  Seems to at least partially make sense to me. 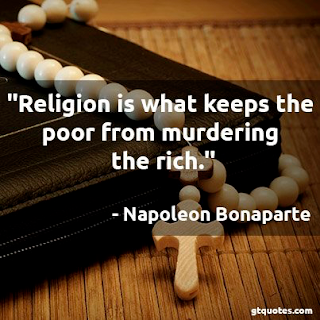 Maybe it's not the intention of religion, and I am not anti-religion by the way, but I think religion has been used as a kind of governing agent for centuries.


Created By Stephen Albert at 9:17 PM