Change? You need to be ready first. 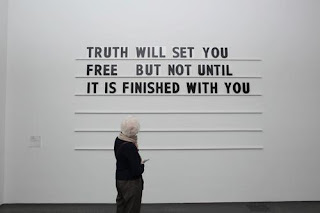 I'm convinced that the world needs another "How to Manage Change" book, because we all know that the existing 4 million of them just aren't nearly enough.

Oh, and I've read a few of those books, and in all honestly, just about all of them have valid ideas, strategies and suggestions to offer.  They really do.  But it's not execution, or execution strategies or models that I think really get in the way of that almost mythical state known as "change resiliency".

I speak only from experience here, but it seems to me that there are two barriers that have to be overcome before any change strategy, no matter how well thought out, can take hold.  Oh, and I doubt very many people are actually "change resilient".  That's a subtle code used by those that create change to goad into a particular action those that they need to change; think the CEO telling employees that they need to be ready for the possibility of job layoffs ("It's critical that we all build change resiliency", so says the person who will likely be financially rewarded for laying others off).

Anyway, here are my two change barriers that must be overcome:

#1 - Mentally Ready State
First, we needs to be mentally prepared for change, or at least aware that it that it is coming.  I don't think lasting change works well as a surprise.  I am not suggesting that readiness is required for change to take hold every time, but what I am suggesting is that if you or I want to initiate change on our own or be prepared when it happens to us, mental preparation is the key.

A good chunk of that mental preparation should be practicing being present and grounded in the moment.  Mental images of the past, be they good or bad, can't be good for current change.  Nor can obsessing over future states that are going to occur regardless of our actions.  Now we should certainly plan for the future, but that's different than obsessing over the future.

In addition, I think it can be argued that "mentally ready" is less of a demarcation line than it is a kind of fuzzy, neutral zone.  However it manifests itself though the fact is that we can't engage in something if we can't conceive of ourselves as actually engaging in that very thing.  I know, that sounds circular, but it has the benefit of being true.

#2 - Nouns
Second, sometimes there are actual barriers that have to be overcome.  By barriers, I literally mean what we all learned in elementary school as defining a noun:  people, places or things.

For example, it's easy to say to the alcoholic that they need to "change", but the reality is that drinking is associated with...

...people - drinking buddies...or the habit of drinking alone and stewing in one's own thoughts...

...places - those social places where drinking becomes a problem...or finding yourself all alone in a home with no one else to talk to other than Mr Jim Beam and his friend Mr Johnny Walker or...

...things - those events that signal to us it's time to drink.

Lest anyone think the non-drinker (me) is picking on drinkers, I'll bring it a bit closer to home.

I've made tremendous changes in my life over the past 5 or so years, but thinking back a decade or more, there were barriers that I needed to overcome before those changes could be made.  The barriers weren't as much outside my head as they were inside my head, but they were barriers never the less.  First I had to be mentally ready for change.  Having me read a great book on, and model for change just wasn't enough.  In fact, it was as I was going through change...not before...when things like change models began to make sense.  The hardest part of change for me was facing the reality of having to deal with those "nouns", both known and those which just seemed to appear as I worked through change.

Notice that I'm not claiming to be an expert in dealing with change, even in my own life.  I still struggle, and sometimes ghosts of the past reappear to remind me of long ago thoughts.  The difference now, at least for me, is that I recognize the struggle for what it ultimately is:  Living Life.  It's not something exterior to my existence, rather it's woven into my existence.


In the end, I'm not pretending to be an academic, but I am categorically stating that I've gone through a lot of change in my life, which I think gives me reason to both pause and to share my thoughts.  Take them for what they are worth, or ignore them if you see fit.  We all have to walk our own journey in life, and it seems to me that part of that journey has to be the act of sharing it with others.  My ten dollar annual investment in a URL and these sometimes random thoughts are included in my act of sharing.

Created By Stephen Albert at 7:38 PM

Email ThisBlogThis!Share to TwitterShare to FacebookShare to Pinterest
Labels: Me (Professional), Me. Deep Thoughts